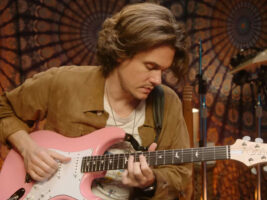 John Mayer has discussed the approach he took to his new record Sob Rock, noting that post-pandemic there’s “no more reason” to deliberately adhere to an idea of cool and that because of this  he was free to make a record that was in some way “provocative if not antagonising.”

Talking with Zane Lowe, Mayer discussed how he wanted to “get in trouble.” “I want someone to tell me this is shit. And [so] I made a record that to me at the time – only in a way to coax something out of me that I wouldn’t normally have done – I shitposted a record. It’s called Sob Rock because it’s a shitpost.”
“More importantly, it’s what I thought was a shitpost. And this gets down to where you have artists sit down in front of you and play you what they think is their garbage, and you go ‘that’s the best thing I ever heard you play.’”
Mayer explained that the desire to break free and “shitpost an album” came about because he “never wanted to be that artist who runs out of paint colours, and begins to just make the same songs over and over again. If you’re lucky enough to be 20 years in, you have do have to deal with… ‘wow, these paint colours they want me to use. It’s another blue painting…’
“So for me, I’m only interested if I get to put new paints on the canvas.”
For those unfamiliar with the term, shitposting is an internet tradition of uploading deliberately and ironically unfunny, inane and poorly-made memes. The term originated in the mid-2000s in the depths of online forums, and has since broadened to include a huge swath of meme culture, regardless of quality but more focused on ironic humour.
Mayer’s certainly not the first musician to “shitpost” an album, however he is likely the first mainstream musician to describe it in such terms.
The post John Mayer says calling his new album Sob Rock was “a shitpost” appeared first on Guitar.com | All Things Guitar.