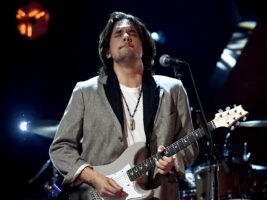 John Mayer talks finding the right amount of 80s flavour for Sob Rock: “If it has too much retro-DNA, two things happen: I lose interest and I don’t believe it”

John Mayer has touched on the 80s influence of his upcoming album Sob Rock, saying he was mindful to make the record feel “like something new” rather than simply a throwback to the era.

Mayer detailed his upcoming record while speaking to Blackbird Spyplane in an interview published yesterday (6 July).
“I’ve had the idea for as long as I can remember to make a new record from archival cloth. Not a reprint, but something new,” Mayer said.
“It’s not a ‘costume’ record. That’s what took the most time,” he explained. “I started off by saying, ‘OK, let’s go full Def Leppard Hysteria on this,’ then I’d do that and have a blast, and then I’d listen back and call bullshit on myself.”
Mayer went deeper on the fine line between 80s-influenced and -throwback. For him, it was about “dialling back” on the more pronounced (and outlandish) aspects of the era – which he dubbed “Asymmetrical-neon-sunglasses ‘80s”.
“Yes, it’s funny to hear a chorused Jackson guitar going through the same amp they used back then,” he said. “But I had to figure out this genetic tightrope walk, where if it has too much retro-DNA, two things happen: I lose interest, and I don’t believe it.”
“You really only need eight per cent to make people understand the vision. Anything past eight per cent and people say, ‘Got it, next.’”
Sob Rock is due out next Friday (16 July) through Columbia Records. So far, only one single has arrived from the record: Last Train Home, which Mayer said was full of “distinct musical references” – listen below.
“I was mindful of making sure the composition felt new,” he said. “I tip my hat to the ‘80s on the execution of the song, but when I play it on the acoustic, it doesn’t sound like an ‘80s song.”

The post John Mayer talks finding the right amount of 80s flavour for Sob Rock: “If it has too much retro-DNA, two things happen: I lose interest and I don’t believe it” appeared first on Guitar.com | All Things Guitar.