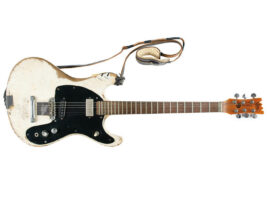 Johnny Ramone’s main Mosrite electric has sold for over $900,000

The auction for Johnny Ramone‘s number-one guitar, played at almost 2,000 shows, has concluded with the instrument fetching $937,500.

The auction was part of The Ramones And Punk Collection Of Daniel Rey from RR Auction beginning 24 August and ending on 25 September in Boston, Massachusetts.
The guitar itself is a Mosrite Ventures II, featuring a single-coil in the bridge and a Seymour Duncan mini-humbucker in the neck. The white finish has seen significant wear, accumulated over the years of constant use. It’s signed on the back: “Johnny Ramone, My Main Guitar, 1977-1996”
The instrument was purchased by Ramone in 1977, intended as a backup to his then primary guitar, a blue Mosrite. When this was stolen from his storage unit, this white Ventures II became his main guitar until the band disbanded in 1996. Upon the Ramones’ disbandment, the guitar was sold to producer Daniel Rey, who owned it up until this sale.
According to the listing, the guitar’s fretboard also features “an incredible amount of wear to the bass side of the higher register frets,” thanks to Ramone’s intense playing style. The neck has at one point been refretted with larger gauge wire, but never refinished. The back of the neck, therefore, also shows “extreme” wear between the first and fifth frets.
When we first covered the guitar at the start of the month, its price was sitting at $80,526 after 14 bids. The final sale price of $937,500 almost doubles RR auction’s expected estimate of $500,000 for the guitar.
See the full lot details at rrauction.com.

The post Johnny Ramone’s main Mosrite electric has sold for over $900,000 appeared first on Guitar.com | All Things Guitar.