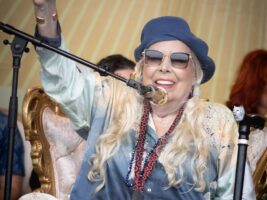 Joni Mitchell on relearning the guitar after brain aneurysm: “I’m looking at videos that are on the net, to see where to put my fingers.”

Joni Mitchell has opened up about re-learning the guitar following her brain aneurysm in 2015, saying that the process felt like “going back to infancy”.

READ MORE: Herman Li says musicians need to be open-minded towards social media: “Control your music and your art… or else someone else is going to”

The singer-songwriter made a surprise appearance at Newport Folk Festival over the weekend, performing a set of 13 songs during the ‘Joni Jam’ with an ensemble of musicians. This marks the first time Mitchell is playing the festival in 53 years.
While the artist was seated for most of her set, she stood up and played the guitar during an instrumental performance of Just Like This Train, a song from her 1974 LP Court and Spark.
Guitar playing was one of the skills the star lost after her aneurysm in 2015, though Mitchell had mostly retired from public performance even before that.
Speaking to CBS Mornings about playing the instrument onstage for the first time in nearly a decade, Mitchell said, “I’m learning. I’m looking at videos that are on the net, to see where to put my fingers.”
“It’s amazing. When you have an aneurysm, you don’t know how to get into a chair. You don’t know how to get out of bed. You have to learn all these things again. You’re going back to infancy, almost.”
When asked how she found the will to do these things again, the 78-year-old Mitchell remarked that she didn’t know, though her brain surgeon did say to her that she had “will and grit”.
Apart from being the first full set Mitchell has performed since 2000, the emotional ‘Joni Jam’ also marked the artist’s first public performance in nine years. Alongside Brandi Carlile, other acts that were part of the performance included Marcus Mumford, country singer Wynona Judd and Dawes’ Taylor Goldsmith.
Check out the full interview below.

The post Joni Mitchell on relearning the guitar after brain aneurysm: “I’m looking at videos that are on the net, to see where to put my fingers.” appeared first on Guitar.com | All Things Guitar.