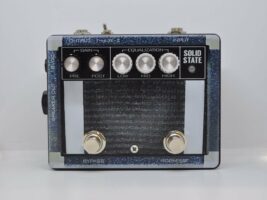 Acorn Amps have taken the inner workings of a retro Peavey Decade practice amp and put them into a pedal.

The pedal, named The Solid State, is considered by Acorn Amps to be a “full circuit recreation” of the compact 10-watt practice amp which usually features an eight-inch speaker. It hopes to house all the well-loved tone in a standard 1590BB enclosure.
The amp gained notoriety after it was revealed to a ‘secret weapon’ in the studio for Josh Homme of Queens Of The Stone Age. These days, one of those amps online can retail for over $500.
The Solid State has a pair of output jacks, allowing it to be used as a preamp pedal, or function as a de facto overdrive/distortion pedal.
Alternatively, as The Solid State has all the original Decade’s TDA series class-AB power amp circuitry, meaning it can power a speaker on its own. This means you can run the pedal through your pedalboard signal path and drive a speaker simultaneously.
It also includes a mute switch, as well as a toggle so you can choose whether to send the signal out before the power amp circuit or after.
Controls include Pre- and Post- Gain knobs, arranged just like the Decade, plus three-band equalisation through Low, Mid, and High dials.
There are two footswitches: one to power the pedal on and off, and the other to toggle between normal and saturation modes, with the LED glowing red when in saturation mode, and green when normal.
Hear it in action below:

The Solid State is also runs true bypass and is powered by 18V DC power supply.
The pedal retails for $299 and is available to pre-order now.
For more information, check out AcornAmps.com.
The post Josh Homme’s ‘secret weapon’ Peavey Decade amp now comes in pedal form appeared first on Guitar.com | All Things Guitar.