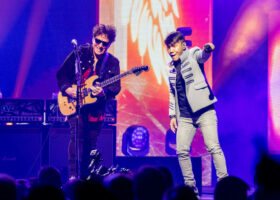 Journey release new single, You Got The Best Of Me

Debuting their most recent track, You Got The Best Of Me, this morning, classic rock legends Journey have also announced that their upcoming album, Freedom, will arrive on July 8. This will be the band’s sixteenth studio album – and arrive over a decade since the 2011 release of Eclipse.

READ MORE: Watch The New Video For Brian May’s On My Way Up

You Got The Best Of Me is the second single to be released from the long-awaited album, following the debut track, The Way We Used To Be, which came out last June.
Following the traditional structure that the band has now become most famed upon, the track delivers that signature sound that every Journey fan has been waiting for: incorporating stunning vocal harmonies, classic 80s-inspired synths and, of course, the brazen solos most associated with guitarist Neal Schon.
The inspiration behind the track’s lyrics also refuses to deviate from what Journey ar most recognised for.
Focusing on the motif of love, the narrative of Arnel Pineda’s lyrics focuses on sharing the story of someone who tries, yet remains unsuccessful when it comes to romance: “For so long I wondered where my heart would lead me / Couldn’t seem to find someone who’d let me be me / Ended up in situations I’d regret.”
An energetic and ultimately optimistic track in its entirety, You Got The Best Of Me seems to reveal that the members have no signs of slowing down with the upcoming album, conveying the same enthusiasm as in their most successful hits yet, including Don’t Stop Believing and Separate Ways (Worlds Apart).
Now confirmed to be available from July 8, over a year since the first single came out, guitarist Neal Schon described the sound of Freedom during an interview with college radio simulcast WMSC and WNUW, stating that the members had written over thirty new songs when planning for the release.
“Some of [the tracks] are unmistakably Journey without sounding like another song that we have; it just sounds like a new version of the band, it’s ballistic, man. And there’s no lack of guitar on this record,” he said. “Many others that have known our music for a long time that have very good ears have said, ‘Look, this is the modern-day-and-age Escape. I think this could be the next Escape for you guys.’ And I think that’s a bold statement, but honest to God, I feel like it’s that good.”
Journey are currently embarking on its Freedom 2022 tour of North America, featuring Toto as the opening act. The tour is scheduled to run until August 8, with the last show taking place in New York.
The tracklist for Freedom is:
1. Together We Run
2. Don’t Give Up On Us
3. Still Believe In Love
4. You Got The Best Of Me
5. Live To Love Again
6. The Way We Used To Be
7. Come Away With Me
8. After Glow
9. Let It Rain
10. Holdin On
11. All Day All Night
12. Don’t Go
13. United We Stand
14. Life Rolls On
15. Beautiful As You Are
Listen to You Got The Best Of Me below.

The post Journey release new single, You Got The Best Of Me appeared first on Guitar.com | All Things Guitar.