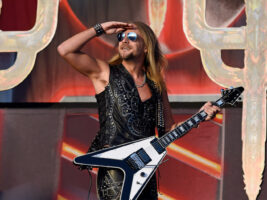 Richie Faulkner has issued a statement with further details on his sudden hospitalisation last week. The Judas Priest guitarist revealed he suffered an aortic aneurysm onstage and was very lucky to have survived.
The incident took place during Judas Priest’s set at the Louder Than Life festival in Kentucky. “As I watch footage from the [show], I can see in my face the confusion and anguish I was feeling whilst playing Painkiller,” Faulkner wrote. “My aorta ruptured and started to spill blood into my chest cavity.”
Faulkner was taken to the Rudd Heart and Lung Center at the University of Louisville where he underwent a ten and a half hour emergency open heart surgery.
“From what I’ve been told by my surgeon, people with this don’t usually make it to the hospital alive,” Faulkner said. “Five parts of my chest were replaced with mechanical components. I’m literally made of metal now.”
Reflecting on the show that night, Faulkner said it was fortunate that Priest only perform an hour-long set, as Metallica would perform right after them. He said: “It does cross my mind if it was a full set, would I have played until total collapse? If it hadn’t happened in such a high adrenaline situation would my body have been able to keep going long enough to reach the hospital?”
At the end of his statement, the 41-year-old guitarist urged fans to get checked for heart conditions. “This came totally out of the blue for me – no history of a bad heart, no clogged arteries, etc,” he said. “My point is I don’t even have high cholesterol and this could’ve been the end for me. If you can get yourselves checked – do it for me please.”

Following Faulkner’s medical condition, Judas Priest have postponed the rest of the US dates on their 50th anniversary tour.
The post Judas Priest guitarist Richie Faulkner reveals he suffered an aortic aneurysm onstage: “My aorta ruptured and started to spill blood into my chest cavity” appeared first on Guitar.com | All Things Guitar.