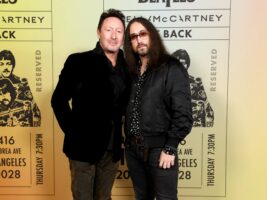 Julian Lennon on seeing his father in The Beatles: Get Back: “ The film has made me love my father again”

Julian Lennon has revealed that watching Peter Jackson’s The Beatles: Get Back was a “life changing” experience for him, and one which renewed his love for his father, John Lennon.

READ MORE: How Peter Jackson used AI to strip out the guitar and uncover The Beatles’ hidden studio conversations on Get Back

Julian and Sean Lennon, the sons of the late Beatle were in attendance of an advanced screening of the feature last Friday (18 November), which took place before a special event held by Paul McCartney’s daughter, fashion designer Stella McCartney.
“What an Amazing night,” Julian wrote in an Instagram post. “Firstly seeing Get Back and then [attending] Stella’s event afterwards.”
“The One True thing I can say about it all is that it has made me so proud, inspired & feel more love for my/our family, than ever before,” he added. “The film has made me love my father again, in a way I can’t fully describe.”

Julian, the son of John Lennon and his first wife Cynthia, were known to shared a difficult relationship. In a 1998 interview with Irish newspaper Independent, the first-born son of the Beatle called his father a “hypocrite” for being an advocate for peace and love but not showing it to he or his mother.
“How can you talk about peace and love and have a family in bits and pieces – no communication, adultery, divorce?” Julian said. “You can’t do it, not if you’re being true and honest with yourself.”
Tomorrow, the first episode of The Beatles: Get Back will premiere on Disney+ which will mark the first time fans of the Fab Four will see rare footage of John Lennon, Paul McCartney, George Harrison and Ringo Starr during the 1969 recording sessions for their final album Let It Be.
The post Julian Lennon on seeing his father in The Beatles: Get Back: “ The film has made me love my father again” appeared first on Guitar.com | All Things Guitar.