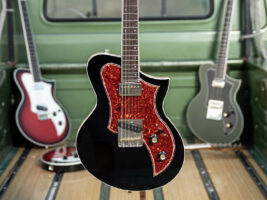 Kauer Guitars raises over $40,000 for Afghanistan evacuation fund by offering guitars in return for donations

Custom guitar builder Kauer Guitars has raised over $40,000 for the Flyaway: Emergency Rescue Mission fund for evacuating those at risk of execution from Afghanistan. Kauer guitars offered to build a guitar for anyone who showed a receipt of a $2,000 donation to the fund and is also raffling off Doug Kauer’s personal Shoreliner guitar. Donation spots are now closed, however, the raffle is still ongoing.
Kauer Guitars wrote on Instagram: “Show us a 2,000 dollar receipt to their Gofundme and I’ll build you a Korona (that you’ll get by the end of 2021).”
Kauer then extended the number of donation slots available and quickly filled up its order book until midway through 2022.

To continue encouraging donations, and still offer a guitar for those who cannot spare $2,000 at the moment, Doug Kauer then opened up a raffle for his own personal Shoreliner guitar. Entry into this raffle only requires a donation of $20 to the rescue fund.

The fund has been established to help those affected by the ongoing situation in Afghanistan, particularly those who have worked as human rights lawyers, champions of Women’s and LGBTQ+ rights, journalists, government liaisons, artists, and interpreters, escape and seek refuge.
It has been established by Tommy Marcus, best known as the owner of Quentin Quarantino – a progressive Instagram meme account that has run similar fundraisers before. However, none have reached this scale: having been launched yesterday (18 August) the fund now sits at over $5.7 million.
To participate in the raffle, head over to Kauer Guitars’ Instagram for details. To contribute to the fund, see its Gofundme here.
The post Kauer Guitars raises over $40,000 for Afghanistan evacuation fund by offering guitars in return for donations appeared first on Guitar.com | All Things Guitar.