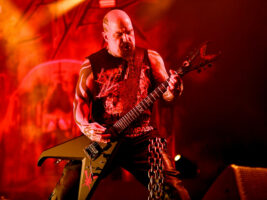 Kerry King has expressed regret at how thrash titans Slayer called it quits just two years after their final show.

In a video congratulating Machine Head on their 30th anniversary, the guitarist talked about maintaining a band for three decades, saying: “So, I hear congratulations are in order for my friends in Machine Head “Apparently, it’s 30 years, which is quite an achievement.
He then added: “Not a lot of bands get there… We did, and then we quit too early. Fuck us – I know. Fuck me. I hate fucking not playing.”

In 2019, Slayer were arguably ahead of the curve when they voluntarily said goodbye to touring. On 30 November of that year, they took to the stage for the last time at the LA Forum, finishing their set with a performance of Angel Of Death, an emotional goodbye to the fans, and a few last stage photos. “Time is precious,” said singer and bassist Tom Araya, “so I want to thank you for sharing that time with us.”

They had made it known beforehand that this would be the band’s last tour. The most recent activity from the Slayer camp has been the development of Kerry King’s new Dean signature, an exceptionally pointy V-shaped guitar featuring glowing LED fret markers and more inverted crosses than you can shake a stick at.
Aside from this, however, the band remain officially finished – for now. Perhaps King’s above reflections have planted the seed for more shows or recordings from Slayer.
The post Kerry King regrets Slayer calling it quits: “Fuck me. I hate fucking not playing” appeared first on Guitar.com | All Things Guitar.