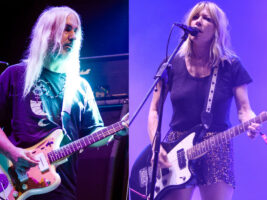 Alt-rock icons Kim Gordon and J Mascis have teamed up for a new two-song single, Abstract Blues. The single has been surprise-released on Sub Pop, and is available to stream now.

The first of the two tracks, Abstract Blues, was previously debuted at the virtual SMooCH benefit concert in aid of Seattle Children’s Hospital last year. That version featured J’s son Rory on drums, but J is behind the kit on this studio version.

The second song, Slow Blow, is new for this release and features some speedy lead playing from Mascis, as well as ferocious, almost screamed vocals from Gordon. The release is available to buy or stream over at Mascis’ Bandcamp.
Last week, Kim Gordon released a new track called Grass Jeans. The release was in aid of Fund Texas Choice, an organisation that provides safe and confidential transport and accommodation, making abortions available to Texans.
The new song was her first fully solo release since her 2019 album No Home Record. Gordon said of the track and the cause in a statement: “I often get asked: ‘Can music change things for people in a political landscape?’ Hell yes it can – but it takes a listener, an audience to make it anything. So please join me in helping to protect and keep accessible a woman’s right to choose her fate by purchasing this song and supporting Fund Texas Choice and their collective efforts to secure abortion access for all. Thank you. It means so much.”
Check out the new collaborative single from J Mascis and Kim Gordon below.
Abstract Blues by Kim Gordon & J Mascis
The post Kim Gordon and J Mascis release two-track collaboration, Abstract Blues appeared first on Guitar.com | All Things Guitar.