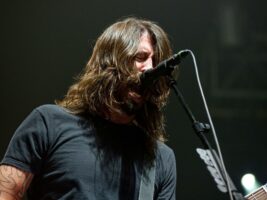 Foo Fighters have announced that they will be cancelling their upcoming tour dates following the death of drummer Taylor Hawkins.

Hawkins’ death at the age of 50 was announced by the band on 25 March, though the band have not provided a cause of death in their statements following the devastating loss. Foo Fighters have now decided that they will be cancelling their upcoming tours to allow themselves time to grieve.
Read the press statement from the band in full below:
“It is with great sadness that Foo Fighters confirm the cancellation of all upcoming tour dates in light of the staggering loss of our brother Taylor Hawkins. We’re sorry for and share in the disappointment that we won’t be seeing one another as planned. Instead, let’s take this time to grieve, to heal, to pull our loved ones close, and to appreciate all the music and memories we’ve made together.
With Love,
Foo Fighters”
The band were on tour in South America, in Bogotá, Colombia ahead of their scheduled performance at Festival Estéreo Picnic when Hawkins passed away. They were scheduled to begin a North American tour in May, which has now been understandably been cancelled.
The band’s statement did not mention their scheduled performance at the 2022 Grammy Awards, which was initially announced the day before Hawkin’s passing. No announcement has been made by the Recording Academy on the status of the performance as of yet, though it has paid tribute to Hawkins, calling him “the heart of [Foo Fighters’] propulsion system”.
Hawkins joined Foo Fighters in 1997, following stints as the touring drummer for Sass Jordan and Alanis Morissette prior to taking up the skins for the Foos. Except for the band’s eponymous debut from 1995, Hawkins has recorded on every one of the band’s studio albums since joining shortly after the completion of 1997’s The Colour And The Shape, from 2000’s There Is Nothing Left To Lose to Medicine At Midnight, which released last year.
Hawkins’ last release with the Foo Fighters was Dream Widow, a companion EP to the band’s metal-horror film project, Studio 666, based on a story by frontman Dave Grohl.
Collaborators and friends have posted tributes to Hawkins on social media. KISS guitarist Paul Stanley tweeted, “Speechless and gutted. Taylor was a great guy, a dad and a husband”, while Rage Against The Machine’s Tom Morello saluted Hawkins’ “unstoppable rock power”.
The post “Let’s take this time to grieve”: Foo Fighters cancel tour dates following drummer Taylor Hawkin’s death appeared first on Guitar.com | All Things Guitar.