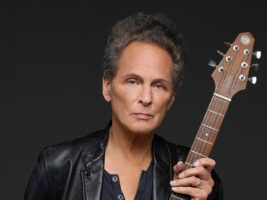 Lindsey Buckingham has released the latest single from his upcoming self-titled solo record, entitled On The Wrong Side.

READ MORE: Watch Lindsey Buckingham put the Acoustasonic Jazzmaster through its paces with a rendition of Never Going Back Again

The new track arrives ahead of what will be Buckingham’s first fully solo record in 10 years. He also released a collaboration with co-Fleetwood Mac vocalist Christine McVie in 2017. It’s set to be released on 17 September.
Buckingham said in a statement that On the Wrong Side evokes Go Your Own Way, as it’s “not a happy song, subject-matter wise, but it was an ebullient song musically. This was sort of the same idea.”
In a statement about the new album, Buckingham said: “I wanted to make a pop album, but I also wanted to make stops along the way with songs that resemble art more than pop. As you age, hopefully you keep getting a little more grounded in the craft of what you’re doing. For me, getting older has probably helped to reinforce the innocence and the idealism that hopefully was always there.”
Take a listen to the new single below, and see Lindsey Buckingham’s full tracklist below.