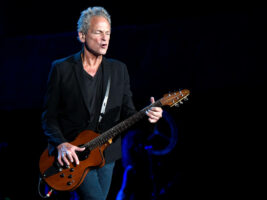 Former Fleetwood Mac guitarist Lindsey Buckingham has released the latest single from his self-titled debut album. The track, Scream, opens the new album, which will be released on 17 September.

“Everything on the record is me, for better or worse,” said Buckingham. “Many of the songs on this album are about the work and discipline it takes in maintaining a long-term relationship. Some of them are more about the discipline and some of them are more about the perks. Scream is about the perks. It felt very celebratory and it was also very, very simple and short.
“To the point. It didn’t evolve into some huge thing. It made its case and got the hell out. It just seemed like a good place to start the album, somehow. It’s very upbeat and very optimistic and very positive. It’s a celebration of an aspect of life.”
Back when the album announcement was made, Buckingham revealed: “I wanted to make a pop album, but I also wanted to make stops along the way with songs that resemble art more than pop. As you age, hopefully you keep getting a little more grounded in the craft of what you’re doing. For me, getting older has probably helped to reinforce the innocence and the idealism that hopefully was always there.”
You can listen to Scream below.

Last month, Buckingham revealed that he believes Mick Fleetwood wants him to rejoin Fleetwood Mac. Buckingham was fired in 2018. Speaking to EW in a recent interview, revealed that there have been “intimations” from Mick Fleetwood, who he claims has been trying to piece the band back together.
“Mick – he didn’t want to see me go in the first place – but he’s talking about that,” Buckingham said. “It’s really going to take [Stevie Nicks] coming to that point of view, and I haven’t spoken to Stevie in a long, long time, so I don’t know where that’s at.”
This revelation came not long after Buckingham expressed hope that he might one day rejoin, telling the WTF With Marc Maron podcast: “It’s my sense that pretty much everyone would love to see me come back.”
Lindsey Buckingham’s new self-titled solo album arrives on 17 September, and can be preordered here. Its tracklist is below.