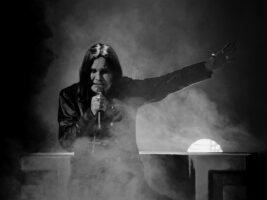 Gothic rocker Ozzy Osbourne has dropped his first single in two years, Patient Number 9 – the first track from his upcoming 13th album of the same title – and he’s brought along one of the most iconic guitarists of all time for the ride.

The Black Sabbath frontman has been releasing music solo since the early 80s but has struggled recently with some much-publicised health issues. The release of new music is a doubly good news for fanys, then as it would indicate he’s on the road to recovery and new music is on the way.
The new track is extra-notable for guitarists because it features Jeff Beck on guitar, the first of a laundry list of A-list guitar guests on the record, with collaborations from Eric Clapton to Tony Iommi and more on the cards.
Although no official details have been released on the regular players for the album, it is rumoured that the new record may feature Chad Smith of the Red Hot Chili Peppers on drums, Metallica’s Robert Trujillo back on bass and even Zakk Wylde returning to gig where he first made his name.
The single features Osbourne’s signature vocal whines and is packed with shrill electric solos and plenty of anthemic chords. So far, the single seems to have fans excited for his return with one commenter writing, “Ozzy out here delivering decades of great music for us all”, with another stating, “This is simply incredible and I have chills”.
You can have a listen to the track below:

Osbourne announced his new album was on the way back in April, where he wrote on social media: “I’m so happy to let everyone know that I finished my new album this week and delivered it to my label @EpicRecords. I’ll be sharing all the information about the album and its upcoming release with you in the next several weeks.”

Having overcome Covid-19 and undergoing life-changing neck and back surgery, it seems like all systems are go for the album to be released on schedule on 9 September via Epic Records, you can find out more on the album and get tickets for his upcoming 2023 tour here.
The post Listen: Ozzy Osbourne releases first single in two years, Patient Number 9 ft. Jeff Beck appeared first on Guitar.com | All Things Guitar.