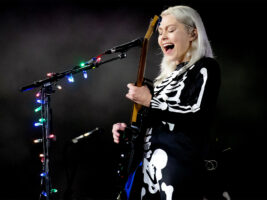 Listen: Phoebe Bridgers shares her “baroque” take on Metallica’s Nothing Else Matters

Phoebe Bridgers has released her “baroque” take on Metallica’s Nothing Else Matters.

The song is part of The Metallica Blacklist, a tribute album of 53 covers released to celebrate the Black Album’s 30th anniversary this year.
Describing the vocal style she used on the cover, Bridgers said she decided to go with a “Billie Eilish approach” of singing up-close with the microphone.
“Literally, James [Hetfield] does all sorts of weird octave jumps and stuff that I can’t do,” she said on Apple Music 1’s New Music Daily. “It was just so fun to take part in it. I feel like my version almost sounds baroque.”
The 26-year-old singer-songwriter also spoke about how she became a Metallica fan, saying her appreciation of the metal giants probably came “way later” compared to other fans.
“When I was a teenager, I went to Outside Lands – and I definitely knew Metallica songs from video games and stuff – but I [saw their set] and was like, ‘This is a rock band.’ It’s kind of a gateway to metal because they’re so hooky and you can hold onto so much of it and it actually can get stuck in your head. So that’s what I’ve always loved about Metallica is that they don’t shy away from a great hook.”

The Metallica Blacklist also includes contributions from the likes of Jason Isbell, Rina Sawayama, The Hu, Idles, St Vincent, Moses Sumney, Miley Cyrus and Elton John.
Proceeds from the album will go to charity, divided between organisations of the artist’s choice and Metallica’s All Within My Hands Foundation. It will be released digitally on 10 September and in physical formats on 1 October.
The post Listen: Phoebe Bridgers shares her “baroque” take on Metallica’s Nothing Else Matters appeared first on Guitar.com | All Things Guitar.