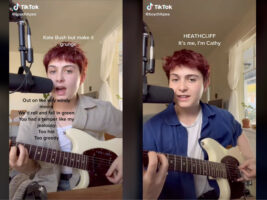 Kate Bush’s very adaptable Wuthering Heights has once again been reimagined, this time as a fantastic little grunge number by TikTok musician Ry Ecko (@boychikpea), and we want the full version.

Armed with an Olympic White Fender Mustang and a Shure SM7B microphone, Ecko delivered a driven performance of several sections of the song. “These chords sound like Nirvana,” captioned the musician in their post – take a listen below.

The clip, shared earlier this month on TikTok, has since racked up over half a million views, enough for Ry to share a second part covering the iconic chorus section of the song just earlier today (26 October).

In the video’s caption, the musician also hinted that they might share a full cover of the song in future: “Been working on the rest of the song here’s a little taste”.
Wuthering Heights was Kate Bush’s breakout debut track from 1978, which stayed at number one on the UK Singles Chart for four consecutive weeks. The song, written by Bush when she was 18, takes inspiration from the 1847 Emily Brontë novel of the same name.
The song is also noted for its tricky vocal delivery, thanks to Bush’s signature range. In the past, bands the likes of Angra and China Drum have each offered their own takes on the song.
The post Listen: TikTok musician reimagines Kate Bush’s Wuthering Heights as a grunge song – and it’s pretty great appeared first on Guitar.com | All Things Guitar.