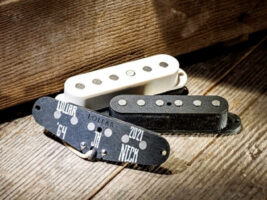 In a bid to promote inclusivity, Lollar has renamed its popular Strat pickups, formerly known as the Vintage Blackface, as the Sixty-Four.

READ MORE: Why the Fender Bassman is the greatest amp of all

The company announced the change in name on Instagram today (3 August) in a statement. “Collectively, we believe the negative connotations associated with the term warrant this change,” the brand wrote.
“We will always strive to be forward-thinking and inclusive to all fans of our products worldwide and feel as though this is more in keeping with the values that Lollar Pickups holds as a company and as individuals.”
The brand’s Special/Blackface set will now be referred to as the Special Sixty-Four set; no changes will be made to the construction, sound and price of the pickups.
The pickup was originally named as such in reference to mid-60s Fender amps that have a black control panel.

Audio terms that many consider antiquated – such as “blackface”, “master and slave” and “male and female connectors” – are gradually being phased out as more brands seek to promote inclusion within the music-making community by using a more neutral language.
Back in July, the Professional Audio Manufacturers Alliance – which counts Audio-Technica, Audix, Sennheiser and more as members – announced it was working to create a “unified terminology” across pro audio brands to popularise alternatives to terms that discourage inclusivity.
The post Lollar renames Vintage Blackface Strat pickups as the Sixty-Four in bid to promote inclusivity appeared first on Guitar.com | All Things Guitar.