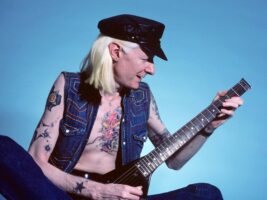 A tribute album celebrating the life and work of legendary blues guitarist Johnny Winter is coming soon, and will feature a stacked lineup of guitar stars from Joe Bonamassa to Steve Lukather.

Brother Johnny is being put together by Johnny’s brother, multi-instrumentalist Edgar Winter, and is due out 15 April through Quarto Valley Records.
The album features artists who’ve been inspired by the work of the late blues great, including Joe Bonamassa, Doyle Bramhall II, John McFee, Robben Ford, Billy Gibbons, David Grissom, Taylor Hawkins, Warren Haynes, Steve Lukather, Michael McDonald, Keb Mo, Doug Rappoport, Bobby Rush, Kenny Wayne Shepherd, Ringo Starr, Derek Trucks, Waddy Wachtel, Joe Walsh, Phil X and Gregg Bissonette.
Fans will be able to pick up the 17-track album on CD and vinyl, as well as listen to it on all major streaming platforms. The first single, Johnny B. Goode released along with the announcement of the album, and features both Joe Walsh and Edgar Winter on vocals.
Listen below:

According to Edgar, the tribute project was several years in the making; he was first approached to tackle it just after the death of his brother on 16 July 2014.
“Many people immediately started trying to convince me to do a Johnny Winter tribute album. But I was totally devastated, and the timing just didn’t feel right to me,” Edgar said. “It wasn’t until after I completed the Rock ‘N’ Blues Fest, a tour we were meant to do together with our respective bands, that the idea of a tribute record started to take form.”
Johnny Winters passed away at the age of 70 after performing at the 2014 Cahors Blues Festival in France. He travelled to Zurich, Switzerland where his next show was scheduled, but passed away in his sleep at the hotel. His cause of death was never officially revealed.
The post Long-awaited Johnny Winter tribute album to feature Joe Bonamassa, Joe Walsh, Steve Lukather and more appeared first on Guitar.com | All Things Guitar.