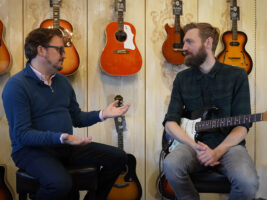 Media influencer behind Paul Davids’ controversial Hendrix Stratocaster video responds: “We are completely satisfied with the provenance of the guitar.”

The organiser of Paul Davids’ controversial I PLAYED JIMI HENDRIX’ $10,000,000 GUITAR video has addressed the questions raised about the authenticity of the guitar in a new statement given to Guitar.com.

READ MORE: Paul Davids: “I’m simply not sure anymore that I did play the Hendrix Monterey Strat”

On 7 December, we posted an overview of the controversial nature of the instrument, noting how, in 2017, it was pulled from sale at Heritage Auctions. A press statement from Heritage at the time said that: “experts examined the instrument and cited concerns that it may not be the same guitar Hendrix played at Monterey”.
In the statement, Myles Poulton, who orchestrated and appears in the video, disputes this, saying that the guitar was pulled due to “a variety of logistical reasons” rather than provenance issues.
We also pointed out some apparent visual discrepancies between the guitar in Davids’ video and in the footage of Hendrix performing with it at Monterey. However, we stated that these could be a result of stage lighting and odd angles.
On 20 December, Guitar.com reported that Paul Davids had changed the name of the video to I PLAYED JIMI HENDRIX’ GUITAR – Or did I?! and pinned a comment on it, stating how he was now unsure of the authenticity of the guitar due to a number of videos sent to him by smaller YouTube channels. These videos called the guitar’s authenticity into question by citing both the Heritage Auctions issue, as well as the apparent visual discrepancies.
Myles Poulton accuses these smaller YouTube channels of trying to “up their viewing and income” off the back of Davids’ video.
Poulton’s statement is below.
“Firstly, with regards to the Heritage Auctions withdrawal point raised. The guitar was due to be sold by Heritage in 2017 in the USA. It was withdrawn for a variety of logistical reasons but not because of provenance issues. We have confidentially shared the correspondence from Fender to Heritage [Auctions] at the time after their detailed inspection of the instrument and confirmation that Fender were totally satisfied.”
“With regards to Paul Davids’ piece – shortly after his amazing video we were both contacted by a representative from a small Youtube Guitar Channel specialising in faking guitars [China Guitar Sceptic]. I agreed to take a call from the channel. We explained that unfortunately, we could not collaborate with every media outlet, and as such we weren’t at liberty to share provenance documents. The channel seemed very unhappy about this and made this known.
“The aforementioned channel then proceeded to hound Paul Davids and myself via social media and emails.
“Shortly after this, damaging videos of hashed together content casting doubt on the instrument began running on YouTube. These videos have now been taken down after our lawyers were briefed on their content. This issue is ongoing.
“During this period, we were in constant conversation with Paul about the title of his piece and support the fact that he didn’t want to be caught in the middle of these issues being preached by a small number of channels trying to up their viewing and income off the back of the 1.7 million views on Mr Davids’ piece.
“We are completely satisfied with the provenance of the guitar. Guitar.com’s readers can Google the many articles written about it over the years in major guitar publications and other trusted outlets including a variety of international museums.
“We have on two occasions offered access and details on the instrument to Guitar.com. That offer still stands.”
The post Media influencer behind Paul Davids’ controversial Hendrix Stratocaster video responds: “We are completely satisfied with the provenance of the guitar.” appeared first on Guitar.com | All Things Guitar.