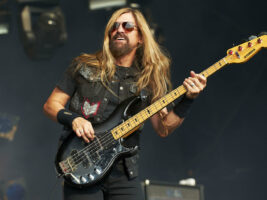 Following the departure of David Ellefson from Megadeth earlier this year, speculation has been rife as to who will replace him on the band’s upcoming tour with Lamb Of God, Trivium, and Hatebreed. The band has confirmed that their former member James LoMenzo will be returning to the bass.

“I’m happy to announce that former bassist and Megadeth alumni James LoMenzo has graciously stepped in on the Metal Tour of The Year. Tour rehearsals just began, and we cannot wait to start crushing North America,” Mustaine said in a statement.
LoMenzo added: “I’m super stoked to be rejoining Megadeth for the upcoming Metal Tour of the Year. There are no better fans than Megadeth fans, I can’t wait to get out there and shred some Megadeth music with you all.”
LoMenzo originally joined Megadeth in 2006, replacing James MacDonough. He was then replaced in 2010 by David Ellefson, who remained with the band until May this year, when videos of him masturbating on a video call with a fan surfaced online. His firing was so definitive that frontman Dave Mustaine revealed that they would be hiring a new bassist – who remains anonymous – to re-record all of Ellefson’s parts for the band’s new album The Sick, The Dying And The Dead.
The title of the record was only recently revealed, in a birthday video addressed to a fan on Cameo. Mustaine also used Cameo to tease the identity of the studio bassist, showing them lying on the floor, their face obscured by the mesh of a studio chair.
“And you got our mystery bass player hiding behind the chair down there on the floor, so you can’t see him,” Mustaine said. “We will be saying who that is soon, and you actually saw him before anybody else. Even though you can’t actually see him.”
The tour is set to kick off on 20 August, starting in Texas. Tickets can be purchased here.
The post Megadeth announce James LoMenzo will rejoin as touring bassist appeared first on Guitar.com | All Things Guitar.