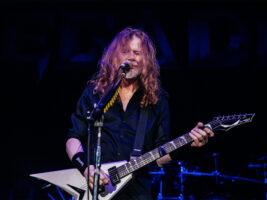 Dave Mustaine of Megadeth has recently admitted to urinating on the bathroom floor of the White House, and this wasn’t a case of bad aim – it was with full intent.

At a Megadeth gig in Tucson, Arizona last Sunday (April 10) the frontman spent some time giving a very meaningful speech down the mic to the fans, which included his shameless admission of peeing on the bathroom floor of the White House, and the best part? He says he absolutely had to do it.
In his very, er, deep and thoughtful speech, he said: “One thing that makes me the most proud of everything here in our country is you guys, the way that you are handling yourselves and the way that… [you do so] as the metal community. There’s a lot of people that go out there and they say things and they totally embarrass themselves. And I want you guys to know how proud I am to represent you.”
He then went on to make the confession, adding, “When I went up to the White House, I was so proud to be able to go up there and say, ‘fuck you – you think we’re stupid? We are not stupid.’ By the way, when I went into the White House, I went into the royal – whatever the fuck it’s called – White House bathroom, and I peed on the floor. I had to… I had to.”

When it comes to his political stance, Mustaine has voted for both parties in the past and considers himself non-partisan.
And not everybody loved his radical admission, the user who uploaded the video of Mustaine’s wacky confession has even titled it “stupid speech”.
Megadeth are currently on tour so if you fancy your chance at catching another classic Mustaine speech, grab yourself tickets here.
The post Megadeth’s Dave Mustaine admits to urinating on the White House bathroom floor appeared first on Guitar.com | All Things Guitar.