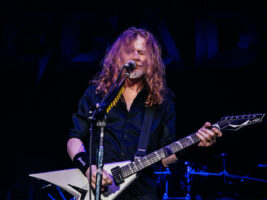 Megadeth singer and guitarist Dave Mustaine has spoken onstage about how glad he is that live music is back, but also railed against mask mandates, calling them “tyranny.”

READ MORE: Dave Mustaine will get signature models from Gibson, Epiphone and Kramer

During Megadeth’s concert on Wednesday in Camden, New Jersey, Mustaine began speaking in between songs, speaking positively about seeing live music being back to normal. “I just wanna tell you how great it is. Look around you, guys. Look to your right, look to your left, and look how wonderful this is. We’re all here together. We’re not in fucking bags,” he said.
Mustain continued: “We’re not freaking out, and we’re not yelling at people, ‘Wear your fucking mask’” He then stated that “it starts with this kind of a sensation that we build right now. We feel together, we feel like strength in numbers. We feel like we are invincible. People will not be able to stop us.” What “it” is is slightly unclear, however Mustaine’s following comments suggest that he was talking about collective action against mask mandates and similar restrictions.
“The thing right now that’s going on is tyranny,” Mustaine said. “This is called tyranny. Look it up when you get home. And tyranny isn’t only in government. Tyranny right now is in the schools and tyranny is in the medical business. So, you guys look it up. We have the power, especially us metal fans, we have the power to change things.”
“If you look at what’s happening in the Middle East right now… I said it a long time ago with this next song, Holy Wars.” The band then launched into their iconic 1990 track.

Mask mandates ended in New Jersey in May, however, legislation varies across the United States. Most state officials are, as of autumn 2021, encouraging unvaccinated individuals to continue to wear masks. However, the majority of states do not legally require mask-wearing. Throughout the pandemic, mask mandates have been placed under scrutiny from various sources, and been politicised by some. A number of politicians and public figures have decried them as an attack on personal freedoms, while others, including the Center For Disease Control, have stated that they are a small price to pay when compared to the unchecked spread of the coronavirus.
Dave Mustaine has stated that his political views do not align with any one political party. However, some Megadeth lyrics express libertarian viewpoints and he has expressed admiration for the works of conspiracy theorist Alex Jones. Mustaine revealed that the 2009 album Endgame was based on Jones’ film of the same name, which speaks of a satanic shadow government obsessed with eugenics, killing the majority of humans and enslaving the surviving population.
The post Megadeth’s Dave Mustaine rails against mask mandates on stage, calls them “tyranny” appeared first on Guitar.com | All Things Guitar.