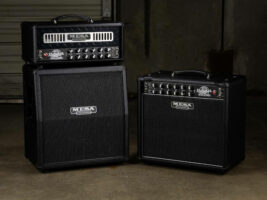 Mesa/Boogie’s Badlander 25 is lightweight, and as heavy metal as Rectifiers go

Mesa/Boogie has announced the Badlander 25 in head and combo configurations, delivering the brand’s signature high-gain tones in a more lightweight amp.

READ MORE: “There’s three sides to every story” Dave Mustaine on 40 years of Megadeth, defying doctors, and a reunion with Metallica that almost happened

Tonally, the Badlander 25 draws from the well of Rectifier amp design, which favours a tight low-end, aggressive midrange and rich harmonics. The two-channel amplifier’s preamp section runs on five 12AX7 tubes, and its rectifier is silicon-based.
“While cut from much the same cloth as its forbearer, the original Dual Rectifier Solo Head from the early 90s, this model stakes new ground and pays homage to rock and heavy sounds in its own new distinctive and more percussive way,” says Mesa in a press release.
On the smaller frame, dynamic loudness comes by ‘mating’ Badlander preamp circuits with a switchable 25-to-10 watt power section, imbued with EL84 tubes and Dyna-Watt technology.
Dyna-Watt helps the amp briefly handle more power than usual for touch-sensitive, punchy tones. It does this by reading incoming guitar signals – determined by pick attack – and adjusting the voltage release.
A closer look at the Badlander 25’s front and back panels, Image: Mesa/Boogie
Both head and combo versions of Badlander 25 feature the same controls per channel, which include master, presence, bass, middle, treble and gain knobs. In addition, a three-position mode switch lets you go from Clean to Crunch to Crush.
In the back, you can access two eight-position CabClone knobs; the amp comes preloaded with eight Mesa cabinet IRs, and you can upload your own IRs via USB.
Plus, there’s also an internal amp load for cabinet-free use, an IR balanced XLR direct output, headphone output and a ground/lift switch.
Hear the Badlander 25 in action, below: