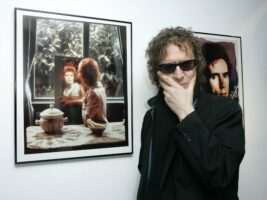 Mick Rock, the legendary rock music photographer who snapped pictures of stars the likes of David Bowie, the Sex Pistols and Queen, has died at the age of 72.
News of his passing was confirmed by his family in a statement made to social media. “It is with the heaviest of hearts that we share our beloved psychedelic renegade Mick Rock has made the Jungian journey to the other side,” it wrote.
“Those who had the pleasure of existing in his orbit, know that Mick was always so much more than ‘The Man Who Shot The 70s.’ He was a photographic poet — a true force of nature who spent his days doing exactly what he loved, always in his own delightfully outrageous way.”
The post did not share a cause of death, see it in full below:

It is with the heaviest of hearts that we share our beloved psychedelic renegade Mick Rock has made the Jungian journey…
Posted by Mick Rock on Thursday, November 18, 2021

Rock’s iconic photographs often made the covers of major music publications, but they also served as the art to several legendary albums themselves. These include Lou Reed’s Transformer and Coney Island Baby, Iggy Pop And The Stooges’ Raw Power, Queen’s Queen II, Syd Barrett’s The Madcap Laughs and many more.
He also produced and directed a number of music videos for David Bowie, including ones for Space Oddity, Life On Mars and Jean Genie. Rock served a tenure as Bowie’s official photographer in the 1970s, capturing many of the iconic images of the late star during his Ziggy Stardust phase.
In 2016, a documentary centred around the life and times of Rock, titled SHOT! was released.
The post Mick Rock, photographer legend who snapped David Bowie, Sex Pistols and Queen, dies at 72 appeared first on Guitar.com | All Things Guitar.