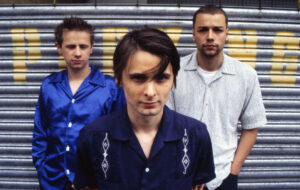 “I have played in every toilet,” sang a 20-year-old Matt Bellamy on 1999’s quirky Muscle Museum. Though the lyric reflects the Devonshire band’s growing weariness with constant van gigging between backwater venues, Bellamy, Chris Wolstenholme and Dom Howard would soon find that their perseverance was paying off. Their next album, 2001’s Origin of Symmetry vaulted the group into the major leagues of mainstream British rock. Within the next five years, and on the heels of 2006’s cinematic Black Holes and Revelations, Muse’s star went supernova, and the Teignmouth trio were soon a globally recognised entity.

READ MORE: The Genius Of… Origin of Symmetry by Muse

With their ninth studio album Will of the People looming, what better time to reflect on a career replete with mind-melting guitar moments. Typically wielding one of his modified Manson models, such as the MB-1, DL-1 or MB-2E, Bellamy has delivered earth-shuddering riffs on the likes of Psycho, Supremacy and Reapers, hysterical lead licks on Plug-in Baby, Hysteria and Dark Shines, and radiant solos across Invincible and Animals. Over the past 23 years, he has all but become the ultimate modern guitar hero, not to mention a distinctive vocalist to boot.
Cribbing a mere 10 examples of guitar mastery from Muse’s catalogue isn’t easy. Here, we’ve chosen what we deem to be the band’s most effective use of guitar on record.
10. Dead Star (Dead Star/In Your World, single, 2002)

The radio-friendly Plug-in Baby, Feeling Good and New Born subverting the singles charts in the early 2000s invigorated Britain’s young rock fans, who were eager for homegrown guitar talent to stake their claim in the post-Britpop wilderness. Something of a reaction to this initial flurry of success, the ferocious Dead Star found Muse shedding their chart-friendly façade and letting their inner beast off its leash. Driven by a nuclear drop-D riff, Dead Star’s merciless momentum is bridged by a sinister verse and cemented by an earth-scorching chorus. A stunning demonstration of the power the three-piece could wield, this single was the roar of early Muse unchained.
9. The Groove (Time is Running Out, single, 2003)

Muse have never scrimped when it comes to quality B-sides. From the sepia-tinted beauty of lost gem Shine to the ominous snarl of Fury, cutting-room-floor classics abound. Backing up 2003’s Time is Running Out was a track that many would contend surpasses its A-side. Driven by a complex lacework riff that ladders itself into your consciousness after just one listen, The Groove is a truly engrossing piece of guitar jockeying. While the central riff maintains the spine of the arrangement, additional crazed guitar parts dance around it in feedback-drenched hysteria. A few years later, the band would revisit this riff and craft rock-club classic Supermassive Black Hole from its elements.
8. Animals (The 2nd Law, 2012)

One of The 2nd Law’s most scintillating pieces, the flamenco-infused Animals was conspicuous on an album stacked with experimentation and dubstep dalliances because it harked back to the classic Muse sound. Though the 5/4 time signature tilts the track on its side, Bellamy’s understated licks in the verse pave the way towards a series of vivid lead guitar breaks, culminating in an unkempt polyrhythmic ending sequence wherein one of the record’s most intense riffs gathers momentum. Animals is an example of all three members of Muse working in tandem and reacting creatively to each other’s shifting melodic and dynamic qualities.
7. Falling Down (Showbiz, 1999)

Though Muse’s first LP presents a still crystallising sound and ambition, it remains a riveting listen, posing a series of potential paths that the band might have taken. The album’s fourth track Falling Down has a raw intimacy quite unlike anything else in the Muse songbook. Written as a bluesy lament for lost love and small-town malaise, the song beautifully orients the A-major scale, with Bellamy’s emotive licks, bends and motifs bubbling over with intensity before restraining themselves to serve as supportive countermelodies for his near-angelic topline vocal. Falling Down was one of the few Muse tracks recorded with Bellamy’s Fender Aloha Stratocaster, purchased for a mere £200 – it’s now worth about £2,000.
6. New Born (Origin of Symmetry, 2001)

For many of the UK’s soon-to-be Muse fans in 2001, the sight of the spiky red-haired Matt Bellamy twirling around the Top of the Pops stage before leaping atop his amp and delivering one of the fiercest riffs to have ever graced the show was a galvanising moment, and underlined the band’s thrillingly alternative attitude. New Born’s main riff tears out of its hushed intro with a fuzz-soaked fury that was unheard of in chart-aimed rock. It all builds to a mosh-inducing megastructure before New Born changes character completely, re-adjusts itself into a relentless aural assault during the verse and then is swept away by the rapturous chorus. While Bellamy rewrites the solo rulebook with the whammy-dominated instrumental section, it’s that breathtaking drop-D riff that defines New Born, launching Muse’s crucial second album with a gripping urgency.
5. Stockholm Syndrome (Absolution, 2003)

The fiery tornado of a riff that brings Stockholm Syndrome to life set the scene for the more varied, multi-hued scope of Muse’s third studio album, Absolution. Built around the Phrygian dominant mode of the harmonic minor scale, this searing drop-D motif leads into verses underpinned by thundering drums before piledriver powerchords accelerate things skyward into a near-psychedelic landscape of synth arpeggios. Before we can get too comfortable, Bellamy’s delivers a salvo of ascending chords. It’s a stimulating listen, even before the space-age, wah-filtered lead break. Consolidating the band’s inventive musicality and raw live edge into five minutes, Stockholm Syndrome remains one of Muse’s best singles.
4. Invincible (Black Holes and Revelations, 2006)

The cornerstone of Muse’s fourth album, this song conjures a sense of revolutionary joie de vivre with its marching snare and Bellamy’s reverb-draped, U2-esque slide intro. Part love song, part celebration of police state downfall, Invincible’s most enchanting guitar moment comes near its conclusion. As Bellamy applies athletic finger tapping with his left hand, his right picks out a series of key melodic notes that emulate and exaggerate the vocal melody. His foot, riding his Digitech Whammy pedal, traverses the octaves to form a truly monumental (if unconventional) spotlight solo. It’s one of Muse’s most stirring moments on record.
3. Plug-in Baby (Origin of Symmetry, 2001)

Driven by one of Muse’s most well-loved riffs, which careens across the B harmonic minor scale with vigour and elegance, Plug-in Baby was the first major indication of Bellamy’s burgeoning guitar-hero aspirations. It also laid bare Bellamy’s aims to incorporate elements of the classical canon into the band’s rock context, with the riff’s introduction doffing its cap to Bach’s Toccata and Fugue in D minor, BWV 565. As the lead single from their second record, Origin of Symmetry, Plug-in Baby for the first time revealed the band’s new future-tilted aesthetic, as well as the increasing prominence of the guitar as the foreground instrument in their arrangements. It also established Muse’s aptitude for building up to earth-shaking, memorable choruses. Plug-in Baby marked the beginning of Muse’s purple patch, becoming their highest-charting single.
2. Reapers (Drones, 2015)

Following the ambitious genre-fusing of The 2nd Law, 2015’s Drones bristled with back-to-basics hard-rock stamina. From the sleazy gallop of Psycho to the progressive maelstrom of The Globalist, with this record Muse sought to reassert their guitar-oriented chops. There’s no finer example of that than the album’s fifth track, Reapers. After a demented flurry of hammer-ons, sharp, desperate chords stab through the verse, punctuating Bellamy’s paralleling of relationship breakdown with global drone warfare. The first of the track’s hulking riffs then follows, climbing the D minor pentatonic scale up to the G Mixolydian mode. It’s reminiscent of a heaving Tom Morello riff – an influence that Bellamy has worn on his sleeve since Muse’s early days. Perhaps Reapers’ best guitar moment, though, comes as we near its third minute, as Bellamy indulges in some exhilarating whammy pedal excavation before swerving into slick pitch-shifted micro melodies. Reapers is a painstakingly crafted thrill-ride, and proved that Muse still had punch – and then some.
1. Citizen Erased (Origin of Symmetry, 2001)

The band’s first multi-sectioned epic formed the centrepiece of 2001’s Origin of Symmetry. It’s characterised by bewitching, unorthodox guitar work – from the scratchy harmonics of the signature riff and the thumping drop-A strikes that define its four-chord structure to the slinky licks of its midsection and the fury of the solo. Citizen Erased – more than any other track on the group’s second album – illuminated Muse’s latent musical ambition, and took listeners on an emotional rollercoaster. Recorded using his custom-built Manson Delorean, Bellamy replaced the E string with a thicker bass string and detuned to A to pack even more of a wallop. The Delorean’s internal Z.Vex Fuzz Factory was used to whip up the intense, boiling-over solo. Though the Citizen Erased template would inform future Muse epics, such as Knights of Cydonia and the three-part Exogenesis: Symphony, it remains an original fusion of beauty and savagery that we return to time and again.
For more guides, click here.
The post Muse’s 10 greatest guitar moments, ranked appeared first on Guitar.com | All Things Guitar.