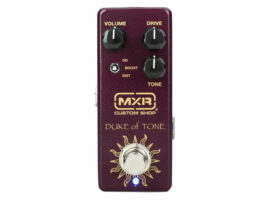 A collaboration between MXR and Analog Man could be coming soon, according to alleged leaks of the Duke Of Tone overdrive shared in various online forums.
READ MORE:
Yesterday (28 June) users from The Gear Page and The Fretboard shared images of the MXR Custom Shop Duke Of Tone overdrive, reportedly taken from a now-deleted Sweetwater listing.
According to the images, the three-knob pedal has controls for volume, drive and tone, along with a three-way mode selector to choose from OD, Boost and Distortion. It also appears to bear the same purple finish and gold graphic elements as the lauded King Of Tone overdrive.
It also appears – based on the purported listing – to have a MSRP of $214.27.
Image: MrTee via thefretboard.uk
Many have speculated that the collaboration will be similar to MXR’s with Paul Cochrane, which yielded the MXR Timmy mini-pedal back in 2020.
A licensed MXR reproduction of the King Of Tone could be a big win for both brands and pedal fans, as the waiting list for the sought-after overdrive was roughly four years in 2021.
Gear Page user SubApathy shared what appears to be a product description of the Duke Of Tone in the thread:
“MXR’s Duke of Tone overdrive is the royal descendant of Analog Man’s Prince of Tone pedal, designed in collaboration with Analog Mike himself.”
“The Duke of Tone’s through-hole components were personally tested by Analog Mike to meet the exacting specifications of the Analog Man original. The result is a rich, harmonic-laden dirt sound with maximum transparency.”
“A standard 3-knob control layout will be familiar to any stompbox aficionado, but the Duke of Tone truly shines with its 3-way selector switch. Looking for a high-headroom boost to stack with another OD? How about an amazingly versatile overdrive tone? Full-on distortion?
The Duke of Tone does it all while retaining each and every subtle nuance of your setup’s guitar and amplifier tone!”
More on this as we know it.
The post MXR Duke Of Tone: Are MXR and Analog Man teaming up on an affordable King Of Tone overdrive? appeared first on Guitar.com | All Things Guitar.