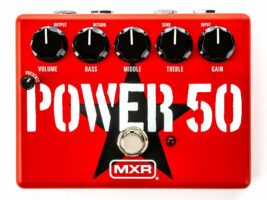 Tom Morello has teamed up with MXR for his latest piece of signature gear, the Power 50. The overdrive pedal recreates the sound of Morello’s go-to amplifier setup.

The Power 50’s sound apes that of the amp and cab setup Morello has used throughout his entire career: a Marshall JCM800 2205 head and a Peavey 4×12 cab. It features controls for gain, treble, midrange, bass, volume and presence, with the gain character aping that of Morello’s Marshall. There’s also an effects loop if you want to, as Morello does, put all of your other effects post-distortion. The effects loop breaks out the pedal’s signal path between the EQ and the volume and presence controls.
Morello said of the pedal in a statement: “The Power 50 Overdrive emulates the amp setup that I’ve used since 1988,” Morello says. “I’ve made 21 studio albums, and that amp, that head, and that speaker, and that tone has been on 21 of them. It’s been my signature identifiable sound since Day One of my career.
“If you want to have the sound that has been on those records, you don’t need to find an amp and speaker cabinet from 1988. You can get that sound with the Power 50 Overdrive, no matter what your setup is.”
The Power 50 lists for $189.99. Find out more at jimdunlop.com.
The post MXR puts Tom Morello’s tone in a box with the Power 50 appeared first on Guitar.com | All Things Guitar.