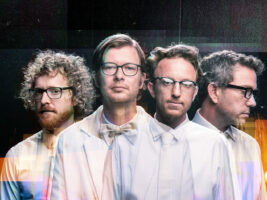 “My guitar playing sails under the radar, and I quite like that”: Public Service Broadcasting’s J. Willgoose, Esq

You won’t read this in many self-help books, but sometimes the best thing you can do in life is to give up. That’s what J. Willgoose, Esq – the dapper, bespectacled creative force behind electronic rock outfit Public Service Broadcasting – did in around 2009, and it turned out to be the best decision he ever made.

READ MORE: Joanne Shaw Taylor on how taking a break helped her find her passion again

“I stopped trying to be an average guitarist in an indie band, because I’d tried that lots of times and failed!” Willgoose reveals, chuckling. “I was just doing stuff for my own amusement really. I was approaching 30 so I just thought, it’s not going to happen now, I may as well just do something that’s fun and if I do need to drag my mates to the pub to watch it, then it may as well be something that’s quite fun for them to watch as well y’know?”
These aims would coalesce into the fledgling Public Service Broadcasting – a band that melded synths, electronic beats and Willgoose’s proggy guitar with snippets from old public information films, telling stories through the music that sought to, as neatly summed up in PSB’s debut album title – Inform. Educate. Entertain.

Since that first album in 2013, Willgoose has been joined by fellow multi-instrumentalists Wrigglesworth and JF Abraham, in creating a series of concept albums and EPs that cover everything from the Space Race to the death of South Wales’ coal industry. But for the band’s fourth full-length, Bright Magic, Willgoose’s muse drew him in a different direction – he was going to write an album about Berlin.
“I didn’t really know why I wanted to write an album about Berlin,” he admits. “I just felt this draw to it, kind of like a magnet really. Something about Berlin is just really, really cool. So I think writing the record was just kind of like, ‘How has this city achieved that status in my head, and millions of heads around the world?’ What is it about the city itself? What is it about the people who’ve been there and built their myths around it, like Bowie and Dietrich? And in answering those questions, the record started to write itself.”