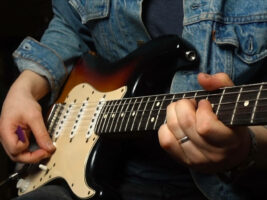 In the latest installment of My Guitar Story, revered guitar player Chris Buck details the story behind his somewhat surprising number one guitar, his beloved 2004 Fender Highway One Stratocaster.
Despite picking up a 1964 Stratocaster back in 2019, the aformentioned Highway One model that he purchased a few years earlier remains his first port of call when it comes to Strats. Initially purchased to test out the signature pickups he was working on with Radioshop pickups, the guitar was in exemplary condition when it arrived and immediately impressed Buck. Once he had settled on what are now his signaure ID: Chris Buck pickups, he became enamoured with the guitar as a whole, “it’s an incredibly solid guitar, it does everything I ask of it” he admits.
Finished in acrylic rather than nitrocellulose, it acts in a similar way to nitro, giving it a more vintage feel. All electronics are original excluding the pickups, and the missing tone knob is due to some minor damage picked up whilst on tour. Although Buck has leaned more heavily on his Yamaha Revstar with Cardinal Black, the Strat can be heard on the record Write A Better Day by Buck & Evans.
Cardinal Black’s latest single, Warm Love, is out now.
The post My Guitar Story: Chris Buck’s Highway One Stratocaster appeared first on Guitar.com | All Things Guitar.