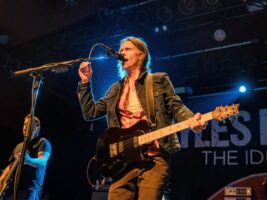 Myles Kennedy has once again addressed the Telecaster-shaped PRS he was spotted with earlier this year, discussing how the instrument was created.

READ MORE: Alter Bridge on their lack of mainstream recognition, 15 years of Blackbird and why they need a gimmick

Kennedy, who utilised the sound of vintage Telecasters for his most recent record The Ides of March, told Guitar World in a new interview that he turned to Paul Reed Smith of PRS for an alternative to using his vintage Telecasters on tour. “We riffed for a long time and they found this sound that was in my head,” he shared, adding that he had always wondered if there was a way to combine elements of early Telecasters with a more modern approach.
“It’s like a P-90 meets an old Blackguard-era Telecaster sound,” Kennedy explained, adding that the guitar was used for all of his solos on the new Alter Bridge LP Pawns & Kings. “It cuts – it’s all there. It’s got its own place, especially with Mark [Tremonti] who’s using humbuckers. It helped distinguish the sound.”
Asked if the guitar would ever be rolled out to consumers, Kennedy was somewhat evasive, telling the outlet, “We’ll just have to see how it plays out.” Kennedy’s Alter Bridge bandmate Tremonti, who was also present in the interview, gave his endorsement of Kennedy’s Telecaster-shaped PRS, adding, “It’s not just for him, I’m getting one given to me!”
The artist has made similarly statements about the guitar becoming available before, claiming in September that “it’s still too soon to tell whether [the guitar] would eventually be something which would be a signature model or not.”
Kennedy was spotted with the guitar in an Instagram post of the rocker performing in Hamburg, Germany on 1 June. Eagle-eyed guitar aficionados were set abuzz and determined that Kennedy’s Telecaster appears to sport the same back-angled reversed PRS headstock that appears on the Silver Sky, along with what looks like a Narrowfield pickup.
The post Myles Kennedy says his PRS Telecaster helped shape new record: “It helped distinguish the sound” appeared first on Guitar.com | All Things Guitar.