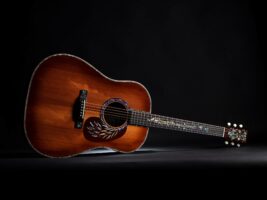 DSS Hops and Barley
Image: Martin Guitar
Beer and guitar lovers unite, for this limited edition instrument pays homage to the grains so often used in beer making. The headstock, fingerboard, rosette, pickguard, and bridge are adorned with a combination of abalone, mother-of-pearl, and wood inlay, which depict hops and barley in various forms.
Featuring a sinker redwood top, highly flamed walnut back and sides, and a Guatemalan rosewood headplate and pickguard, the DSS Hops and Barley combines some Authentic build features like a dovetail neck joint, hide glue construction, and a 1931 old-style logo along with more modern ones such as a taper neck and Liquidmetal bridge pins.
Listed at a price of $12,999, this model is limited to 100 instruments. Each purchase also comes with a paper label signed by C. F. Martin IV.
CS-SC-2022
Packed with custom features, the CS-SC-2022 is the first Nazareth-made instrument with the revolutionary SC body style.
The guitar features East Indian rosewood back and sides for a “bigger and bassier sound” than its predecessor and a Vintage Tone System top that gives it that coveted aged Martin tone. It also comes loaded with Liquidmetal bridge pins, Fishman Aura VT Blendelectronics, and the brand’s patented Sure Align neck system so you no longer have to contort your hand to reach those high notes.
Equipped with a low-profile velocity neck barrel, the CS-SC-2022 is said to offer the “comfort and playability of an electric”. A performing guitarist’s dream indeed.
Listed at a price of $7,999, this model is limited to 300 instruments.
Custom Major Kealakai
This 12-fret acoustic pays tribute to Major Kealakai, a guitar, trombone, and flute player who trained under the Royal Hawaiian Band and was inducted into the Hawaiian Music Hall of Fame in 1996.
In 1916, Martin made the Major a custom guitar that was wider, deeper, and longer than a 000. Designed to be louder to help fill concert halls, this historic guitar was the precursor to the brand’s iconic ‘Dreadnought’.
The guitar features a vintage gloss-finished sinker mahogany back and sides, a Adirondack spruce, a dovetail neck joint, slotted headstock with Golden Age relic nickel side-mount tuners, hide glue construction, and an authentic 1931 neck shape and 1931 X-bracing.
Each guitar is also treated with Martin’s Vintage Tone System, a process that targets a specific time period and ages the guitar’s top/braces to that era for a more authentic vintage look and sound.
Listed at a price of $7,999, this limited-edition model comes with a hardshell case.
D-Robert Goetzl 2 (Eagle) and D-Robert Goetzl 5 (White Tiger)
These two custom one-of-a-kind acoustic guitars were created to honour treasured species from the animal kingdom and feature original artwork by artist Robert Goetzl hand-painted on the soundboard. One model features an American Eagle and the other features a White Tiger.
The guitars come in a full-gloss-finished East Indian rosewood back and sides with a Sitka spruce top and forward-shifted scalloped X-bracing for a full and balanced sound. They also come loaded with an ebony fingerboard and bridge and a stylised script logo on the headstock.
Listed at a price of $12,499, each model includes a paper label signed by the artist.
D-42 Special
Created in conjunction with former Martin employee Dick Boak, the D-42 Special is a high-end Dreadnought model featuring premium-grade East Indian rosewood back and sides, a soundboard constructed with the highest grade of Sitka Spruce, and a scalloped forward-shifted X-bracing, which ensures the open projection for which Martin guitars are prized.
The idea for this model began nearly 25 years ago when Martin installed its first laser engraving machine, and Boak began experimenting with various ways to utilise it. Boak created an illustration of a complex floral design that was meant to be laser engraved into a tortoise pickguard, but the plan was scrapped when the material proved unable to be safely engraved.
23 years later, Boak came across his original illustration and working with Bill Seymour and Jeremy Chism at Pearlworks this time, the trio modified the artwork to allow for the detailed pearl inlay work.
Additional vintage-inspired appointments include antique white bindings; abalone inlay along the perimeter of the top, fingerboard extension, and rosette; a full gloss finish with top ageing toner; and nickel open-gear tuning machines with butterbean knobs.
Listed at a price of $12,199, this model is limited to 100 instruments
D-17 Squadron
Martin’s final special edition guitar — inspired by the WWII squadron planes that were painted and made famous by the legendary American Volunteer Group, the Flying Tigers — features artwork by author and illustrator Robert F. Goetzl, who has created artwork for the brand on several occasions.
The guitar’s body shape and style are built on the foundation of a D-17, and the artwork is digitally applied on the Sitka spruce top.
Listed at a price of $1,999, the D-17 Squadron is sure to turn heads wherever you go.
The post NAMM 2022: Martin unveils seven special edition guitars, including one that pays homage to beer-making appeared first on Guitar.com | All Things Guitar.