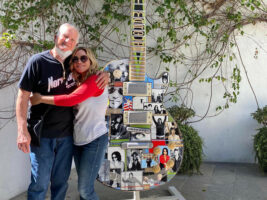 Norman Harris, founder and owner of the iconic vintage retailer Norman’s Rare Guitars, has revealed his cancer diagnosis and shared that he is undergoing treatment.
Earlier today (20 May), Harris’ daughter shared a post on social media to inform followers of the news.
“I know this may come as a shock to people because we’ve kept it somewhat private, but my dad was diagnosed with a rare form of cancer,” she wrote. “We really just didn’t want to talk about it, have to answer questions or give it too much life, so we’ve just been pretending that it’s not happening.”
She explained that her father had recently undergone surgery and faced issues with his heart on top of everything he’s been through.
“Tuesday was my dad’s surgery and it was 14 hours long and included something called a chemo bath, which will HOPEFULLY help him avoid having to do chemo,” she continued. “On top of everything he’s been through with the surgery – two nights later, he had a widow-maker heart attack.”
“We’re just trying to get through each day at the moment,” she concluded the post.