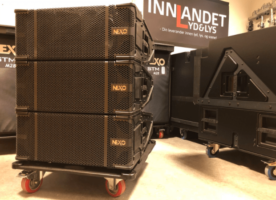 Just two years old, Innlandet was started by two 20-year-old engineers who have been steadily growing the company with NEXO products.

Amund Kvernvold and his partner Marius Nordeng are the newest faces on Norway’s audio rental circuit. Located just two hours outside Oslo, their business had expanded to the point that they wanted a main PA solution that could take them to the next level. Having started out renting NEXO GEO S12 line arrays, they were impressed by the modularity of STM Series, which they describe as “small but huge”, able to scale up from small events in a private house to a large festival.

“When we started looking to invest in a bigger system, we wanted to have an all-in-one solution, not a brand with different PAs for each and every use. With the STM, we can have a DJ session at the club one night and a 5,000-capacity festival the next day just by scaling the same system,” the company stated.

With the support and advice of Asle Skarslette at Stagelab, NEXO’s distributor in Norway, the Innlandet team chose a 12-module set of STM M28 with 6x STM S118 subbass cabinets, amplified by NXAMP4x4s.

“We strongly believe in simple and fast solutions that do not compromise on quality, and that meet our requirements when it comes to efficiency. We really like the way one man can safely rig 50 STM cabinets. At our last production, I de-rigged 42 boxes on my own before the last guest-production left the stage. Sonically, STM is an impressive system that sounds absolutely fantastic.”

With plenty of STM inventory in Norway, it is easy for Kvernvold to sub-hire additional cabinets to expand the Innlandet system for larger shows. Just an hour away, Erik Granlien at Ringebu Lyd in Gyovik was the first rental company in Norway to invest in STM M28. He has now increased his stock with an additional 6x M28 modules and 6x STM S118 subs, proving Amund Kvernvold’s theory that “STM is a system that can grow with the rental company.”