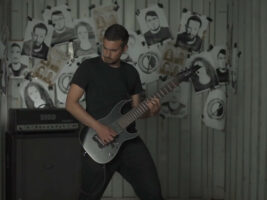 Waking up to headlines about a new variant of COVID-19 is always a strange experience, but even stranger if you happen to be in a death metal band called Omicron. The Belgian band have received some fresh attention thanks to their name, and have spoken about the odd experience of sharing a name with a new strain of COVID.

READ MORE: Gene Simmons tells sceptics: “Get your goddamn COVID shot… you don’t have as many rights as you think!”

The World Health Organisation has been naming new COVID variants after letters in the Greek alphabet. From Delta, it skipped Xi , as that’s also the last name of the Chinese president, but the same consideration was not given to a small death metal band from Belgium.
In an interview with Vice World News, the band explained the origins of their name. “Our guitarist Philippe has an unhealthy obsession with aliens and all the interstellar obscurity that comes with it,” they said. “He came up with our name because he was inspired by the Dyson sphere that had been found in the Omicron Cygni constellation.” A Dyson sphere is a hypothetical megastructure, one that allows a civilization to take complete advantage of its sun by surrounding it entirely with solar panels. They have been proposed as the explanation of some strange pulsations in some stars’ light levels. So, nothing to do with the pandemic.

We noticed the name Omicron is being mentioned a lot in the news lately and while we can’t help it that the WHO decided…
Posted by Omicron on Saturday, November 27, 2021

Despite the possible association with a deadly virus, the band plan to stick with their name. “Nobody could predict that this would happen and we hope that people will see that,” Omicron, the band that is, said. “[Are] we planning to change our name? Hell no. We will not let a virus determine the way our concept should be perceived.”
“We were a bit anxious that our name might get a negative connotation,” they said. “But we also felt it might give us the exposure much needed for bands [starting out] in a world overcrowded with musicians trying to leave their mark upon the industry.”
That exposure, as the existence of this article and the Vice interview proves, has already manifested. They were sure, however, not to seem overly facetious about the overlapping name. “Having the same name as the new coronavirus variant feels like an extra responsibility we have to carry,” Omicron said. “We are still going to tread carefully here because we do not want the world to think that we are thriving on other people’s suffering.”
The post Omicron (the death metal band) celebrate the spread of their infectious riffs to a wider audience appeared first on Guitar.com | All Things Guitar.