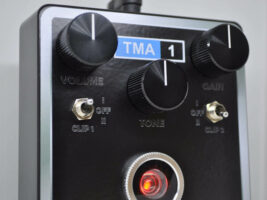 Acorn Amps has launched a new fuzz pedal into the universe, the TMA-1. The pedal was, according to the brand, found buried 15 metres beneath the surface of the moon. Despite this, it’s still a regular-sized pedal that takes standard 9V power. Convenient.

With four stages of transistor gain, the TMA-1 pedal will put itself to the fullest possible use, all that any guitar effects unit can ever hope to do.
Controls on the pedal offer convenient knobs for volume, gain and tone, so if it becomes too violent, you can just turn one of these down – no need to pull out any memory units. There are also two toggle switches to adjust the operation of clipping stages – choosing between Germanium, Silicon or off.
The pedal’s unique design also features a “giant glass lens indicator” which glows red, to both let you know when it’s on and “to remind humans of the impending singularity that threatens to doom mankind.”
See an official demonstration (of the pedal, not the singularity) below.

The pedal lists for $199. Find out more at acornamps.com. Preorders will begin shipping in early December.
The post Open the pedalboard doors, HAL: Acorn Amps releases the TMA-1 Fuzz appeared first on Guitar.com | All Things Guitar.