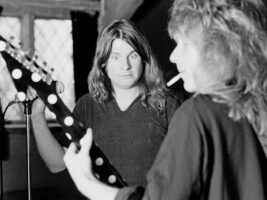 Ozzy Osbourne offered some insight into the six-string rivalry between Randy Rhoads and Eddie Van Halen, during a recent interview with Rolling Stone.

READ MORE: Zakk Wylde on hearing Black Sabbath’s music for the first time: “I was beyond terrified”

The Prince Of Darkness gave an interview to the publication in time for his just-out solo album, Patient Number 9. A number of cut interview topics – including Rhoads’ opinion of Van Halen – made it onto a follow-up article.
Ozzy weighed in on Van Halen’s claims of greatly influencing Rhoads as a guitarist.
“I heard recently that Eddie said he taught Randy all his licks … he never,” Ozzy said.
“To be honest, Randy didn’t have a nice thing to say about Eddie. Maybe they had a falling out or whatever, but they were rivals.”
Ozzy was referencing Van Halen’s 1982 phone interview with Guitar Player where once spoke about Rhoads: “He was one guitarist who was honest anyway because I read some interviews he did, and Randy said everything he did he learned from me. He was good.”

Randy Rhoads was a founding member of Quiet Riot and lent his guitar playing talents to Ozzy’s first two solo albums, 1980’s Blizzard of Ozz and 1981’s Diary of a Madman. The guitarist passed away in an aeroplane crash in 1982; he was just 25.

Elsewhere in the article, Ozzy spoke about catching Jimi Hendrix live with Black Sabbath bassist Geezer Butler, whose impression of the guitar legend was “he was crap”.
Patient Number 9, the 13th solo studio album from the Prince Of Darkness is a star-studded project, with the likes of Eric Clapton, Taylor Hawkins, Jeff Beck, Tony Iommi and many others contributing.
The post Ozzy Osbourne: “Randy Rhoads didn’t have a nice thing to say about Eddie Van Halen” appeared first on Guitar.com | All Things Guitar.