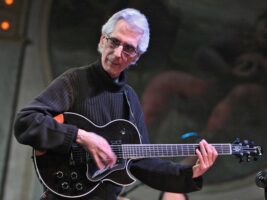 Pat Martino, the jazz guitar giant who overcame a mid-career brain aneurysm and relearned to play the instrument, has died at the age of 77.
The guitarist’s manager, Joseph Donofrio, confirmed his passing, telling the Philadelphia Inquirer that Martino passed away in the same Philadelphia row house he grew up in.
Martino was suffering from chronic respiratory disorder since 2018 and was living with oxygen support; he had been unable to play guitar since that same year.
A prodigious player who studied with guitarist Dennis Sandole, Martino is best known for his modern, high-speed phrasing and crosspicking talents. Across his career, he cut 27 albums as bandleader and was a sideman on countless more.
In the late 1970s, Martino suffered a brain aneurysm which effectively wiped his knowledge of the guitar. Starting over on the instrument – and studying his own past recordings – he was able to relearn his methods, releasing the 1987 live album The Return to mark his comeback.
The process of relearning guitar was an arduous and frustrating one, which drove Martino to a deep state of depression.
“[The guitar) became a utensil unlike the way it used to be,” Martino told Lehigh Valley Live in 2019. “It used to be a profession and became a career. It became another utensil that provided what was provocatively fulfilling.”
“[The medication that] was being prescribed for recovery was going to subdue something that was so incredibly destructive at that time and that didn’t work and that produced a great deal of amplification in the frustration,” Martino said.
“It was either I do something that absorbed my attention or consider suicide. I reached that level and I chose the former and began to play with toys like a child does. My favourite toy, as it always was, proved to be the one that was beneficial to begin with and that was the guitar.”

The post Pat Martino, modern jazz guitar great, dies at the age of 77 appeared first on Guitar.com | All Things Guitar.