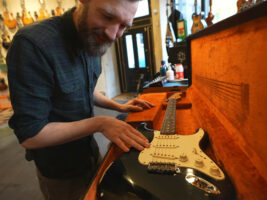 Paul Davids: “I’m simply not sure anymore that I did play the Hendrix Monterey Strat”

YouTuber Paul Davids has stated that the reporting surrounding his recent video, in which he ostensibly plays the black Stratocaster that Jimi Hendrix played at Monterey, has made him question whether or not the guitar is authentic.

The guitar has come under scrutiny from multiple sources, including Guitar.com. We noted how the instrument was pulled from sale at Heritage Auctions after experts examined it, as well as the physical discrepancies between the guitar in footage of Monterey and as it appears in Davids’ video.
We also stated that it was unclear where the valuation of $10,000,000 that is stated in the video and its title came from – the instrument seen in Davids’ video was sold for $200,000 in 2012, and in 2017 (before it was pulled from sale) Heritage estimated its sale price to be $750,000.
Davids’ video was first uploaded under the title I PLAYED JIMI HENDRIX’ $10,000,000 GUITAR. Shortly after the publication of Guitar.com’s investigation into the instrument, as well as several other YouTube videos, the title was changed to simply I PLAYED JIMI HENDRIX’ GUITAR. Now, the title of the video reads: I PLAYED JIMI HENDRIX’ GUITAR – Or did I?!
A pinned comment underneath the video from Davids explains further. “After publishing this video I came to learn that some people seem to be in doubt about the authenticity of the guitar… Here’s a short explainer about everything I know so far,” he writes.
“Before making this video I received a document with many details regarding this guitar. Basically, the entire history seems to be well documented – from when it left Jimi’s hands till this point – and it made me certain the guitar was legit.
“Signed affidavits from Hendrix’s manager (Bob Levine, who got the guitar from him) and the roadie/UK manager (James Tappy Wright who transported the guitar) with matching serial numbers. A letter from Fender to the auction house saying they have no doubt this guitar is the Monterey Strat (concluded after an extensive inspection by Master Builders George Flanda, Scott Buehl and Custom Shop Vice President Mike Lewis).
“Pictures from apparent matching damages to matching grain on the neck. Pics and letters of the guitar on exhibit in several museums through the years, etc. etc. Pretty overwhelming evidence one can say, right?
“But since then I’ve seen other people claiming there are some visual discrepancies between the guitar I played, and the guitar Hendrix used on stage in Monterey.
“And I’ve come to the point where I just can’t be sure whether it is the real deal or not. I feel like I can make a case for both sides of the story. But I feel obliged to say that I am sure that neither Myles [Poulton, the owners’ PR consultant] nor the current owner deliberately try to fool anyone.
“They were honest to me about the whole thing and never tried to hide anything. Myles very kindly responded to my messages, and was willing to put forward more emails and letters he had about the guitar when the first doubts started to arise.
“I guess if you were trying to fool anyone, literally the last thing you want to do is have a YouTuber film every last detail of the guitar in question and put it out there in the open for everyone to see.
“That said, I’m quite sad and sorry to see it like this. I was so blown away by the experience; the guitar, the video, the opportunity, the plunge into Jimi’s history, it felt like a dream come true. At this point, I’m simply not sure anymore that I did play the Hendrix Monterey Strat.”
Davids concludes on a slightly more positive note, stating: “One thing I am sure about though… Hendrix really was the most legendary guitarist of all time, wasn’t he?”
Guitar.com has reached out to Myles Poulton and Paul Davids for comment.
The post Paul Davids: “I’m simply not sure anymore that I did play the Hendrix Monterey Strat” appeared first on Guitar.com | All Things Guitar.