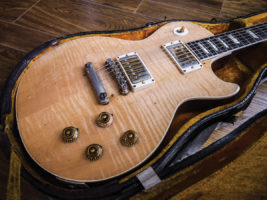 In 1974, Paul Kossoff’s drug problem was spiralling out of control. He sold a number of guitars, including the iconic ‘stripped’ Les Paul used during Free’s Isle Of Wight Festival set. The guitar hasn’t seen the light of day since the mid-1990s, but G&B was recently granted a world-exclusive audience with one of the most mysterious Bursts of them all.The post Paul Kossoff’s ‘Stripped’ Les Paul – Songs Of Yesterday appeared first on Guitar & Bass.

The Hives to release films of past live shows for free

The 1975 once again delay Notes on a Conditional Form