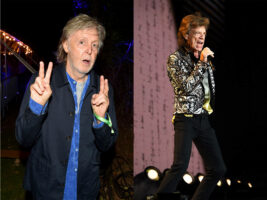 Paul McCartney has repeated his assertion that the Beatles’ musical influences were more diverse than their contemporaries The Rolling Stones, calling the latter a “blues cover band.”

READ MORE: Paul McCartney discusses the Beatles split: “This was my band, this was my job, this was my life, so I wanted it to continue”

McCartney made the comment in a new interview with The New Yorker, ahead of the release of the new Peter Jackson-directed documentary Get Back.
It’s important to note, especially in a guitar publication, that being just a “blues cover band” isn’t inherently negative. However, McCartney clarified his point of comparison, suggesting that the Beatles were working with a much larger set of influences.
“I think [the Beatles’] net was cast a bit wider than theirs,” he explained.
The comment came after a discussion of the Beatles’ musical complexity, with the New Yorker story noting that “even classical mavens were impressed” with the band’s grasp of harmony, melody and songcraft, citing a time when composer Ned Rorem analysed the Fab Four’s songs in The New York Review Of Books. Here, There And Everywhere was compared to Monteverdi’s A Un Giro Sol, and Michelle to the works of Francis Poulenc.
McCartney has made similar statements before, most recently in 2020, when he told Howard Stern: “[The Rolling Stones] are rooted in the blues. When they are writing stuff, it has to do with the blues. We had a little more influences … There’s a lot of differences, and I love the Stones, but I’m with you.”
“The Beatles were better,” he concluded.
The post Paul McCartney calls the Rolling Stones a “blues cover band” appeared first on Guitar.com | All Things Guitar.