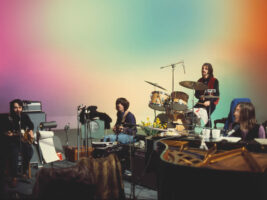 Peter Jackson has revealed what he thinks fans will find most surprising about his upcoming documentary series, The Beatles: Get Back.

WATCH: Peter Jackson drops a special preview of The Beatles: Get Back

Jackson shared that the project will show the Beatles in a “far more intimate” manner than fans may be used to seeing.
“Because everyone is used to seeing music documentaries being a bit kind of MTV-ish, sort of together in a poppy kind of way and it’s just the music, music, music, you know?” He told GQ. “The music isn’t at the forefront of this film: weirdly, it’s what goes on behind the music at the forefront.”
This approach in practice, according to Jackson, comes through in how he and his team handled footage of the Fab Four’s famed rooftop concert.
“We have the concept that we’re inter-cutting all the time to the street and to the policeman and everything else,” Jackson said. “So we’re not just sitting there on the concert for 45 minutes, we’re showing a whole narrative of what’s going on elsewhere during that period.”
“There’s probably more conversations with The Beatles in the films than there is actual singing. People won’t be expecting [that] sort of intimacy […] where you’re in a time machine and you’ve gone back and you’re a fly on the wall with the Beatles.”
The Beatles: Get Back is touted to present a positive counter-narrative to the 1970 film Let It Be, which bared conflicts and arguments between the band’s members. The three-part documentary series will release on 25 November via Disney+.
The post Peter Jackson says his Beatles docuseries will be “far more intimate” than fans are used to appeared first on Guitar.com | All Things Guitar.