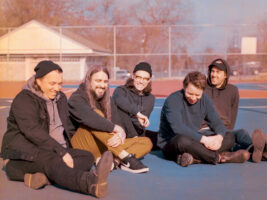 Post-hardcore veterans Pianos Become The Teeth have been bringing interesting sounds and cinematic soundscapes to the world since 2006, and now return with their fifth studio album, Drift.

Below, guitarists Mike York and Chad McDonald examine their favourite guitar parts on Drift, and tell us how they created them.

Genevieve
Mike York: I really love the guitar interplay on this song; one guitar part ends, the other one begins. There is a lot of call-and-answer stuff. One of my favourite parts is the break where the song cuts into 5/4 at the 1:49 mark. We play this simple descending riff, which we ran through a 1960s Echoplex. As the line continued to descend, we would pull the tape head back and forth to pull the whole part out of tune and introduce a ton of wow and flutter. I love those moments that feel like you’re underwater. My main guitar on this was a Fender Jazzmaster through a 1968 Twin Reverb with the original JBL speakers. Super-loud, kinda stiff, but it worked really well, taking all the fuzz and stuff we put through it.
Chad McDonald: My favourite guitar sound on this song is the intense phaser that comes in at the 3:09 mark. When Kevin was recording this, he set up two amps to create the phase effect – a Sunn Solarus and a Roland Jazz Chorus. I used a Skreddy Hybrid OD to get the bright distortion on that part of the song.

Skiv
Mike: This was one of the most simple tracks to record, because the purpose was for it to feel really claustrophobic. The tone is really dry at times, with a slight vibrato. I was going for something akin to the Dummy-era Portishead guitar sound. What makes this song so special are the subtle effects that show up and the space they create. There are big contrasts between these dry guitar parts and these moments where this really soaked-with-delay-and-reverb sound will pop in for a second. Just playing with those extremes made this one really fun and interesting. The amp I recorded this through was an old Ampeg B-18X – a solid rock amp from the 1960s that added a ton of character to this and a lot of other parts of the record.
Image: Micah E. Wood
Buckley
Mike: The beginning of this song was a guitar part that Chad played, which we resampled into an SP-404 and just mangled the hell out of. That was a theme throughout the record: making things push and pull out of tune and feel kinda disjointed. We ran the opening line through the SP-404 and resampled it through a bunch of tape delay and reverb. I think this song has the biggest dynamic switch on the record. It does this really saturated, strange, somewhat country-sounding riff in the beginning and ends as a hyper-fuzzed-out rock song.
The long instrumental break that begins at about the 1:42 mark is a cool moment. I slowly turned up an MXR Analog Chorus pedal’s rate throughout the entire part to give it this Leslie-vibrato kind of sound – slightly inspired by the guitar in Black Hole Sun by Soundgarden – that turns almost into a ring modulator by the end of it. I like how we tried to make every part evolve instrumentally and sonically through these long breaks on the record. It keeps them really interesting to listen to.
Image: Micah E. Wood
Hate Chase
Chad: This song was written in a single practice, which is rare for us. It’s a straightforward rock song played mostly with downstrokes and sharp-sounding chords. I used a Fender Starcaster reissue through a stock ’71 Princeton Reverb, which was driven by an Xotic EP Booster. That pedal was my main overdrive on this record. I like it because it’s subtle and easy to control – just one knob. The fewer knobs on a guitar pedal the better.
I like the Starcaster, and other hollowbody guitars, because if you stand in the right spot in front of your amp, you’re able to get a more responsive and touch-sensitive feedback oscillation going than with a regular guitar. Many of my guitar riffs and chords have a droning string, or a note on the B or G string that gets slightly bent during a held chord to add character. You can hear that during the verses on this track.

The Tricks
Chad: A loud guitar amp on the verge of breaking up and with a heavy amount of reverb is my default guitar tone. The small amount of guitar I play on this track is a Princeton Reverb turned up to 7, just on the verge of breaking up, with the reverb about 6. The reverb on the Princeton adds a bit of drive to the signal and will heavily distort if set to 10. I like that guitars aren’t meant to carry this song, they just add character since the drums, bass and vocals drive it.
The bend riff at 0:07, which is sprinkled throughout the song, is a two-string bend that starts with one string pre-bent a full-step up, which then descends to the root note. This makes it sound a little bit discordant as the bent note travels back to the root and the other string’s note is static.
Pianos Become the Teeth’s new album, Drift, is out 26 August.
The post Pianos Become The Teeth embrace tape manipulation on new album, Drift appeared first on Guitar.com | All Things Guitar.