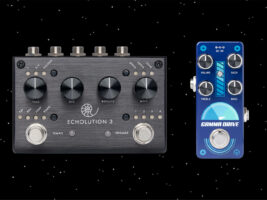 Pigtronix has introduced two fresh effects pedals this month: the Echolution 3 is a stereo multi-tap delay and the Gamma Drive is a dirt box with a two-band EQ.

The Echolution 3 arrives five years after its predecessor and offers plenty of sound design options – from vast reverse soundscapes and stereo ping-pong to twinkling pitched-up fluctuations.
Aside from getting more out-there effects, the Echolution 3 can be fine-tuned for accuracy with subdivision controls and tap tempo. Its delay ranges from 100ms to 5 seconds.
Aside from your usual fare of delay controls – time, mix and repeats – you get a modulation knob to adjust the speed, depth and tone of your chosen effect. It saves four presets onboard, and it has in-depth MIDI controls as well for greater flexibility.
It also has to be pointed out just how sleek this edition of the Echolution looks in comparison to its predecessor – but whether or not you’re a fan of the modern aesthetic, the compact enclosure and neater control interface are definite plus points.
Watch an in-depth rundown of the Echolution 3 below:

The Gamma Drive comes in a mini-enclosure and is described as a “germanium-enhanced overdrive” with active Treble and Bass controls. The pedal offers a unique blend of germanium, LED and silicon diodes for asymmetrical clipping and “touch-sensitive” performance.
Hear a demo of it in action below: