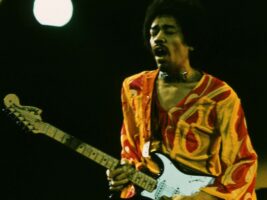 A plaster cast of Jimi Hendrix’s penis will go on display next month at the Icelandic Phallological Museum in Reykjavik.

READ MORE: Steve Jones addresses Sex Pistols biopic controversy: “It was very stressful, that court case. It was the last thing that I wanted”

The artefact was donated by the late Cynthia Abritton aka Cynthia Plaster Caster, an American artist famous for creating plaster casts of rock stars’ erect penises. Describing herself as a “recovering groupie”, Abritton decided to donate the cast — one of a few of the guitarist’s genitalia — to the museum shortly before her death this April.

Apart from Hendrix, whose contribution to the field of phallology was made in February 1968 on his Chicago tour, artists such as Dead Kennedys frontman Jello Biafra, Buzzcocks’ Pete Shelley, and MC5’s Wayne Kramer have also modelled for Abritton.
Speaking in an interview with Rock Scene ten years ago, Abritton said: “Jimi Hendrix was coming to town. He was my first real rock star that dipped his dick and it was unbelievable. We were the groupies that got to the hotel first and we were the only groupies in Jimi Hendrix’s room. It wasn’t our very first cast. I had tried it on a few civilians first to be ready for Jimi.”
“He’s my biggest. No, he’s not my biggest. There are ‘bigger-ish’ others,” she added.
“But I couldn’t say whether or not he’s my most exciting. Because they’re my sweet babies and I am their mama and I’m very democratic with all my babies. I don’t like to play favourites. I love them all. The experiences were equally exciting and weird and different from each other.”
The unveiling of the cast will take place next month at a closed event at the museum, where it would presumably remain on display for fans and visitors for all of eternity.
Founded in 1997, the Icelandic Phallological Museum boasts a collection of more than two hundred and fifteen “penises and penile parts” from almost every land and sea mammal that can be found in Iceland, including “four specimens belonging to Homo Sapiens”.
Click here to learn more.
The post Plaster cast of Jimi Hendrix’s penis to be unveiled at Iceland’s Phallological museum appeared first on Guitar.com | All Things Guitar.