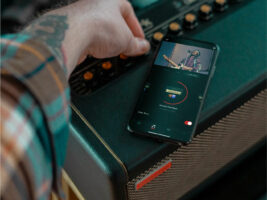 Positive Grid‘s upcoming Authentic Hendrix pack for BIAS FX 2 and Spark will offer players an arsenal of amps, pedals and guitars that are each modelled on Jimi Hendrix’s gear.

Emulated amplifiers from the pack include models from Marshall, Sunn and Fender which Hendrix played across his career both onstage as well as in the studio. Meanwhile, the pedal range includes recreations of the Dallas-Arbiter Fuzz Face, Roger Mayer’s Axis Fuzz, Uni-Vibe and Tone Benders, along with several wah pedals.
The Authentic Hendrix pack also lets players ‘play’ the guitarist’s legendary six-strings through Guitar Match, a feature which alters incoming guitar signals to make them sound like Hendrix’s. Models available include a Les Paul ‘57 Goldtop reissue and a number of Stratocaster models, including the ’65 he set ablaze at the Monterey Music Festival in 1967.
You can get the pack for your DAW via BIAS FX 2, or add it to your Spark desktop amp setup. Positive Grid’s Authentic Hendrix collection will be released on 14 October 2021. Pricing has yet to be announced.
Guitarist-YouTuber Sophie Burrell has shared a demonstration of the pack on her channel, which you can check out below: