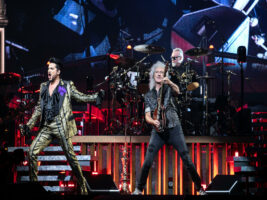 Rock legends Queen have been announced as one of the many artists set to perform at the Queen’s Platinum Jubilee celebration happening early next month. The four-piece, now fronted by American vocalist Adam Lambert, will be the first ones on stage, opening the concert that marks the monarch’s 70 years on the throne.

READ MORE: Brian May Names Queen “Mentors” That “Would Have Been As Big As The Stones”

Taking place on June 4, the event, known as the Platinum Party at the Palace, will mark 20 years since the band’s guitarist Brian May famously performed on the palace roof as part of the Queen’s Golden Jubilee.
Refusing to provide any information as to the location of their upcoming performance, May hinted that fans can expect another unique choice of stage this time around:
“There was a moment when I wondered, after Buckingham Palace roof where can you go?” He pondered in a recent press recent statement. “Well… you will see!”
The event is predicted to have over 22,000 attendees, with more than 7,500 of the tickets gifted to key workers, members of the Armed Forces, volunteers and charities.
Listed as one of the main centrepieces of the monarch’s celebrations, which will take place over a four-day bank holiday weekend, the two-and-a-half-hour concert is rumoured to include three stages and an array of 3D projections across the front of the palace.
Diana Ross, Hans Zimmer, Andrea Bocelli and Nile Rodgers are just a few of the countless names partaking in the event, with their performances broadcast live on BBC One throughout the day.
Other musicians on the bill include Eurovision singer Sam Ryder, Alicia Keys, Duran Duran and Craig David.
Sir Elton John will also be a part of the event, although as the event conflicts with his current European tour, his performance for the Platinum Jubilee will be pre-recorded.
The Platinum Party at the Palace will occur on June 4. Live coverage of the event will be shown on BBC One.
The post Queen to open ‘Platinum Party at the Palace’ concert for the Queen’s Platinum Jubilee appeared first on Guitar.com | All Things Guitar.