Radiohead’s Ed O’ Brien demands streaming platforms offer better rates: “I would do this for free, and that’s precisely what’s been taken advantage of”

Radiohead guitarist Ed O’Brien, along with Elbow’s Guy Garvey and singer-songwriter Nadine Shah, have spoken to the UK government about the state of streaming payouts – arguing that the platforms aren’t offering high-enough payouts for artists, large and small.
The trio of musicians gave evidence to the Department of Culture Media And Sports’ inquiry into the economics of streaming. The conversation was defined, of course, by the impact of COVID-19 – without touring income, artists are now relying almost solely on income from streaming. This is especially true for unsigned artists or artists on smaller labels, who can’t rely on revenue generated from sales of physical albums. All three said that streaming has created an imbalanced system – where the largest labels get the biggest cuts, and smaller artists lose out.
For context, to earn a year’s minimum wage in the UK via streaming on Spotify – a musician needs almost five million streams. Payouts from streaming services vary: at present, Spotify is believed to pay between £0.002 and £0.0038 per stream, while Apple Music pays about £0.0059. YouTube Music pays the least – about £0.00052 per stream.
Radiohead’s Ed O’Brien noted that musicians are often passionate about their art, but that can lead to artists with a smaller platform having to accept how things are: “[you think] ‘I am the luckiest bugger on the planet. I would do this for free.’ And that’s precisely what’s being taken advantage of.”
O’Brien added: “The inherent problem we have as musicians is we love what we do. It’s like therapy. I had years of depression and I kept my head above water because I’m in this band with my brothers.”
This point was echoed by Guy Garvey, who said smaller artists, “no matter how leaky the boat is,” don’t want to rock it – in a ‘biting the hand that feeds’ situation. Garvey added that the current model is “threatening the future of music,” as “if musicians can’t afford to pay the rent, if they can’t afford to live, then we haven’t got tomorrow’s music in place.“
Garvey also hosts a show on BBC 6 Music, on which he sees evidence of musicians failing financially: “So much of the new music that I play, I don’t hear album two or album three. And I know why that’s happening.”
Singer Nadine Shah was also asked by MP Kevin Brennan about Spotify’s tip jar feature – which she described as: “insanely condescending … an admission of sorts which says, ‘We know that you aren’t making enough.’”
She also said it was embarrassing to be an ostensibly ‘successful’ artist but be struggling financially. Shah’s 2017 album Holiday Destination received a Mercury prize nomination, and more recently her 2020 album Kitchen Sink garnered critical acclaim from a large number of mainstream outlets, but despite this: “The earnings from my streaming are not significant enough to keep the wolf away from the door. I am struggling to pay my rent, and I am embarrassed to talk about these issues publicly.”
Recently, Spotify CEO Daniel Ek made controversial comments, in which he stated that “you can’t record music once every three to four years and think that’s going to be enough.” The sentiment was (too put it lightly) poorly received by musicians with varying degrees of fanbase size. David Crosby, for instance, called Ek “an obnoxious greedy little shit,” while R.E.M. bassist and songwriter Mike Mills said “Music = product, and must be churned out regularly, says billionaire Daniel Ek. Go fuck yourself.”
The DCMS’ inquiry into streaming is currently ongoing, looking at the practices of streaming platforms in the relatively new landscape of the current music industry.
“Music streaming in the UK brings in more than £1 billion in revenue with 114 billion music streams in the last year, however, artists can be paid as little as 13% of the income generated,” reads the inquiry’s official description.
Recently, the United Musicians and Allied Workers Union (UMAW) has also garnered support from across the music world for a new campaign titled Justice At Spotify. Among other things, this demands higher streaming rates, and has gathered support from a number of notable artists.
For more industry news, click here.
The post Radiohead’s Ed O’ Brien demands streaming platforms offer better rates: “I would do this for free, and that’s precisely what’s been taken advantage of” appeared first on Guitar.com | All Things Guitar. 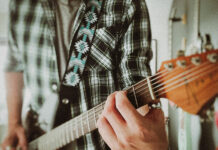