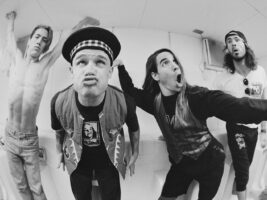 Red Hot Chili Peppers have announced a huge worldwide stadium tour for 2022. The major tour will be the band’s first on since guitarist John Frusciante rejoined the band after a decade-long absence.

The news was shared in the form of a news broadcast from the fictional KHOT station, in which news anchors Anthony Kiedis, Flea and Chad Smith interview Frusciante about the upcoming tour. the “Might we expect you and the fellas to play live any time soon?” Flea asks Frusciante, to which he responds that the world tour will kick off in June 2022, before US dates begin in July.

No dates have yet been announced for the tour, but fans are able to sign up to the band’s mailing list here to be notified when more details are available.
The band have reportedly begun talks to sell their catalogue of songs to Hipgnosis, becoming the latest in a large list of bands to do so.
The deal, which Billboard reports may not have closed yet, is worth at least £100million ($140million) and is likely to include their entire discography.
Meanwhile, Frusciante’s replacement for the 2010s, Josh Klinghoffer, has joined Pearl Jam as a touring musician, with his first performance with the band being at the Sea.Hear.Now festival in New Jersey’s Asbury Park over on 18 September.
The post Red Hot Chili Peppers plot 2022 world stadium tour appeared first on Guitar.com | All Things Guitar.