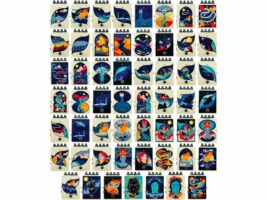 READ MORE: Boss FZ-1W Review: A new addition to the Boss fuzz family with no shortage of attitude

Each Nonpareil overdrive features a unique iteration of a dual germanium/FET circuit for vast drive flexibility. The collection was hand-built by Red Witch head honcho Ben Fulton, who has hand-signed and numbered each pedal.
Image: Red Witch
According to Fulton, the point of the series is to offer players a chance to own a completely unique pedal: “Something that nobody else has. Something special. Something we can treasure”
In the control section are four knobs, two of which set the input and gain levels of the first and second gain stages respectively. The other two adjust the presence and master volume of the effect.
The unique pieces of art which adorn each pedal were created by New Zealand artist Rachael Gannaway, and correspond with each line of the poem.
Hear the pedal in action below:

If you’re planning on picking up one of these unique overdrives, be sure to do so quickly. They go for $449 apiece now, but as collectable things are, it’s expected these will rise in value on the second-hand market.
Learn more at redwitchpedals.com
The post Red Witch launches collection of 54 one-of-a-kind Nonpareil overdrives appeared first on Guitar.com | All Things Guitar.